For several decades, the Juan Santamaria International Airport (SJO) in Costa Rica was described as a spartan, no-frills facility for air travel. It wasn’t until almost the end of the 20th century that tourists and expats coming to Costa Rica started to see features that are standard in many airports around the world, such as terminals, lounges, duty-free shops, and places to eat. 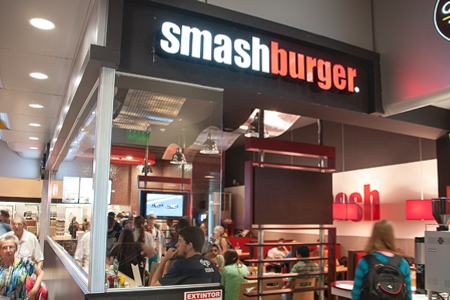 The SJO experience is no longer a hasty affair of landing, crossing the tarmac, getting your luggage, stamping your passport, and jumping into ground transportation. Today’s SJO is beginning to look a little more like your average airport in Europe and North America, which means more fast-food outlets to grab tasty, yet not quite healthy, bites to eat.

According to financial weekly El Financiero, the master franchise giant QSR International recently opened eight of its quick-service and fast-food retail locations at SJO. Getting the highly-prized permit to operate at SJO may have been a long, drawn-out affair for QSR International, but opening all their locations took them only a year and $5.5 million.

Next time you find yourself in SJO, you will find a food court near Gate 4. This dining area consists of the following options: KFC, Quiznos, Smashburger, Cinnabon, and Q’Corner. Near Gate 10, you will find a smaller Quiznos To Go where you can grab a sub or wrap to go; this will come in handy when you fly on those stingy airlines that charge for everything -from luggage to minuscule meals.

Another Quiznos To Go is now at Gate 3. Fans of Ron Centenario, one of Costa Rica’s most distinguished liquors extracted from sugarcane, will now be able to enjoy a quick sip at the Bar & Cafe Centenario right in front of Gate 8. By the way, if you want to know what beer aged in a Ron Centenario barrel might taste like, be sure to check out some of the seasonal offerings by Costa Rica Craft Beer.

You can expect typical airport pricing at these new dining options, but QSR International vows to be competitive at the right time.

The opening of these eateries has netted 100 new jobs for bilingual employees at the airport. QSR International owns a bunch of fast-food joints in Costa Rica, and they plan to open five more KFC restaurants during the next 12 months. This is part of a greater trend happening across the country, wherein fast-food enterprises are being well-received by Ticos and expats alike.

Q24N - Arriving in the Guatemalan capital about two hours late, after the plane in which she was traveling had to turn around due...
Travel

QCOSTARICA - The Daniel Ortega government sent its ambassador to Costa Rica, Duilio Hernández, as its representative to the summit of Central American presidents...
Tourism

QCOSTARICA - This Sunday, the Guanacaste Airport - a member of the VINCI Airports network - received the first of the daily flights from...
Reports