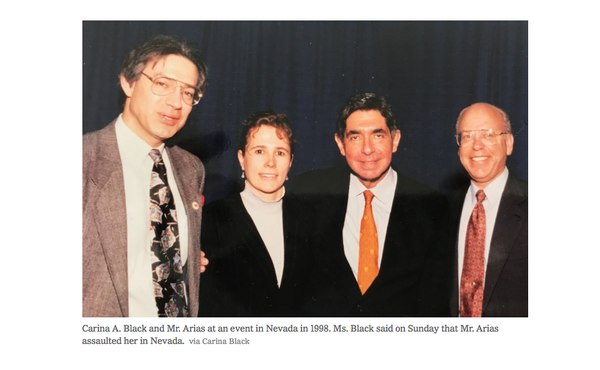 The list of women who claim to have faced cases of sexual harassment by former president and Nobel Laureate, Oscar Arias Sanchez, continues to grow. The latest alleged victim is a US political researcher.

This Sunday, Carina A. Black, 52, a political scientist at the University of Nevada, Reno, told The New York Times that Arias tried to grope and kiss her in 1998 when he visited the university as a speaker.

According to the  NYTimes, as she took Arias around at meetings and events, Ms. Black said, she found herself alone in an elevator with him when he pushed her against the elevator wall, put his hand across her chest and tried to kiss her.

“I pushed him, and I smacked him in the face,” she said.

Because she was not injured, it never occurred to her to file a report, Black told the NYTimes.

She affirmed that he is now doing so to support the version of Alexandra Arce von Herold, a psychiatrist and activist for nuclear disarmament, the first woman who on Monday, February 4, filed a criminal complaint (denuncia) for rape against Arias.

“Arias is so powerful. He has huge land ownership. He is so revered. In Latin America, the power is so tilted on the side of men. This behavior is what most women have grown up with,” said Black.

Three other women has also come forward, making public the alleged acts of harassment by the former president, but they have not filed a denuncia.

QCOSTARICA - Searching for a consensus candidate in the Partido Liberación...
Read more