The former president Nobel Laureate rejects charges: 'I have never acted disrespecting the will of any woman'

A doctor and activist, and daughter of a former PLN legislator denounced former president and Nobel Laureate, Oscar Arias, for rape that would have occurred in 2014.

The complaint was made before the Fiscalía Adjunta de Género (Deputy Prosecutor’s Office of Gender), on Monday.

The Public Prosecutor’s Office confirmed on Tuesday that a complaint about a sexual offense against a person surnamed Arias was filed on Monday. However, because it is a case under investigation, it indicated that no further details will be revealed.

The complainant had related her story to the weekly university newspaper, Semanario Universidad.

The following is part of the story published by Semanario Universidad:

“I opened the folder, I explained, and when we finished I got up with my back to him. Then, he grabbed me from behind and touched my breasts. I told him no and that he was married. That was my no. It was the only thing I could think to tell him. I had met his wife.

“I do not remember what he said, but he kept touching me, he put his fingers in my vagina and he touched me all over and he kissed me. And then he told me to wait for a bit and he left the office. I was like I did not know what to do, I felt trapped at that moment”.

The Univesidad say it also has the story of several witnesses to whom the complainant told the details hours and days after the alleged attack..

According to the victim, who was 30 years old at the time and led an organization dedicated to activism to abolish nuclear weapons, the incident occurred on December 1, 2014 at the former president’s house, located in the posh neighborhood of Rorhmoser, on the west side of San José, where she went to deliver documents about an anti-nuclear campaign. 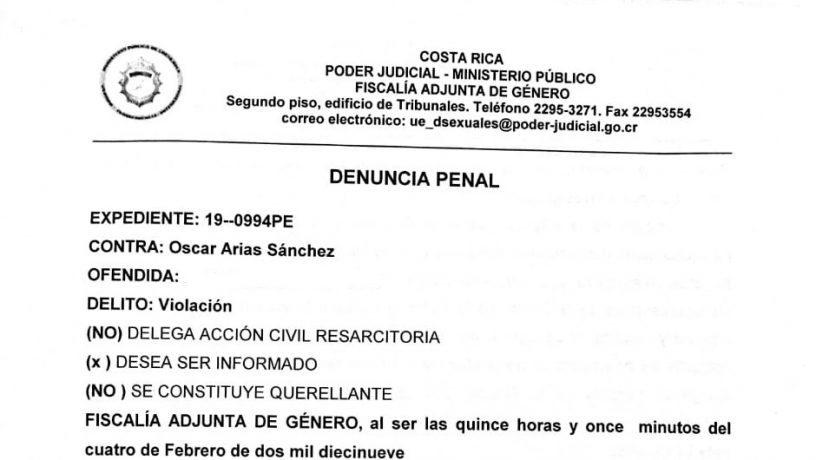 According to the woman’s testimony, on the morning of that December 1, 2014, she had a meeting with a Costa Rican diplomat and then went to the former president’s to hand him a folder with information about the anti-nuclear campaign, which he was supporting.

The doctor says that after the attack, the former president left the office for a few moments. “He came back and said: ‘Oh no, it’s that we cannot here, we have to go to the office’, one he keeps in Barrio Escalante or Barrio Dent, I do not know. And I thought to myself: ‘what are you talking about?’ And I said: ‘Aha, yes, it’s fine’, because it was like my chance to leave. Then I got into my car and went home.”

Once at home, the complainant said that she called her boyfriend via Skype, since he lives abroad. According to her story, while she was telling him what happened, she received a call from Arias who complained that she had not gone to his office.

She says that she asked her boyfriend – who was listening on Skype – to keep quiet while on the call and dodging Arias, telling him she had a meeting in the Legislative Assembly.

Consulted by Universidad, the complainant’s boyfriend recalled that that day she called him and told him about the interview he had had with Arias and explained that, at the end, that he “touched her sexually” and that she “panicked”.

“It took her a while to realize what really happened to her, that she is not the one who did something wrong, that she was not the culprit, but rather the victim,” he said.

According to the Universidad, the complainant also told the story to her father, her mother, friends and colleagues.

One of the first to find out was her colleague Martin Hinrichs, who was part of the International Campaign to Abolish Nuclear Weapons (ICAN). Both attended an event in Vienna, Austria, days after the attack, so the doctor told her what happened, hearing a nervous breakdown during the trip.

The weekly also published a series of messages by victim to friends and family. 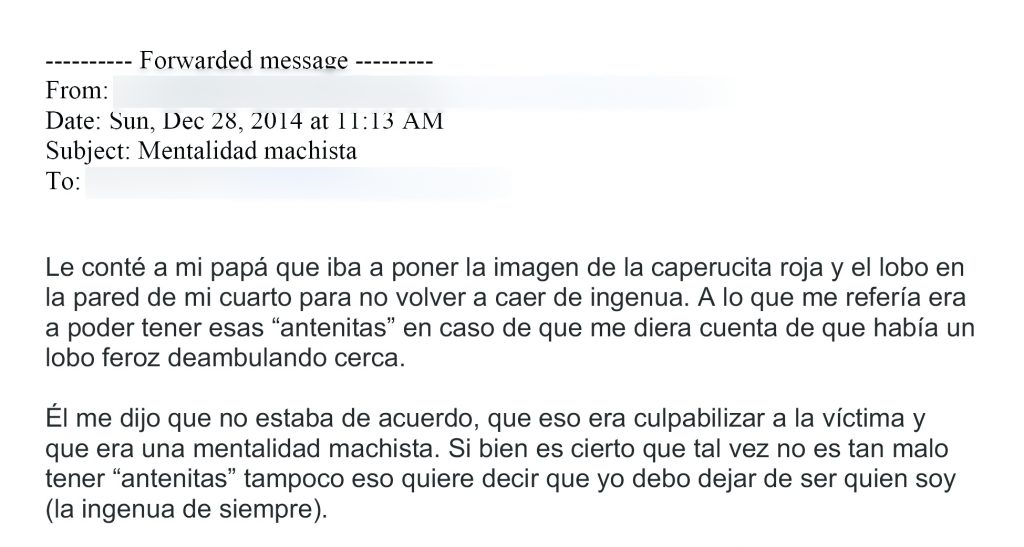 Oscar Arias rejects rape charges: ‘I have never acted disrespecting the will of any woman’.

The former president, in a statement sent to the media by his lawyer, Rodolfo Brenes, said:

“With regard to the information published today (Tuesday), I must say that I categorically reject the accusations that are made against me. I have never acted disrespecting the will of any woman, even less in the case of her freedom to relate to another person.

“In my public life, I have promoted gender equality, because I consider it an indispensable means to achieving a more just and equitable society for all people.”

Arias assures that he will defend himself in the courts of justice for the charges against him.

“Being that, reportedly, there is a (criminal) complaint made against me, I will exercise my defense before the Courts of Justice and I will not make further public comments on this issue,” Arias said in a statement.

The Penal Code on rape

The law also states that “the same penalty shall be imposed if the action consists of introducing one or more fingers, objects or animals to the victim, vaginally or anally, or forcing the victim to introduce them herself”.

A small river in the middle of coffee plantations,...