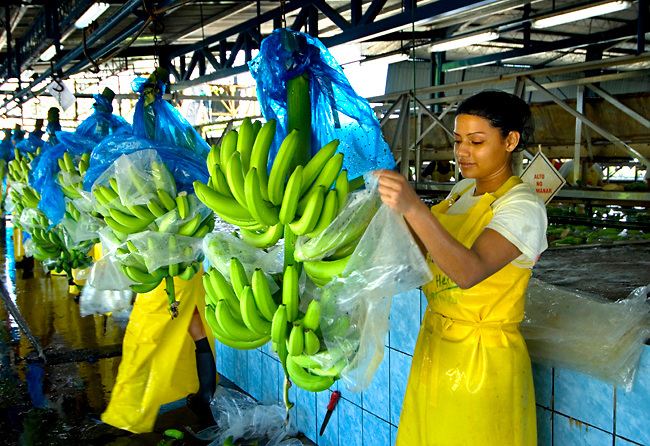 The United Nations Food and Agriculture Organization warned this week of a fast-spreading TR4 strain of Panama disease that has not so far affected banana-producing Latin America exporters such as Costa Rica Ecuador  or Colombia, TR4 was discovered in Jordan and Mozambique, indicating it moved beyond Asia, he said.

The TR4 strain of Panama disease, a soil-born fungus that attacks plant roots, is deadly for the Cavendish banana that makes up about 95 percent of supplies to importers, including North America and Europe, Fazil Dusunceli, an agriculture officer at the FAO, told Bloomberg by phone yesterday from Rome.

Global exports reached a record value in 2011 and totaled 18.7 million metric tons, making bananas the world’s most widely-traded fruit, according to the most recent FAO data. The U.S. is the top importer, followed by Belgium, the data show. Belgium’s Port of Antwerp is the world’s largest banana port, it says.

U.S. consumer prices for bananas were 59.9 cents a pound in February, 2.2 percent higher than an almost three-year low reached in October at 58.6 cents a pound, according to data from the Bureau of Labor Statistics. The export price of bananas from Ecuador, the world’s biggest shipper, and Central America for U.S. destinations was $966.85 a ton in March, the highest in 18 months, according to the International Monetary Fund.

ens of thousands of hectares of banana crops in Indonesia, China, Malaysia, the Philippines and Australia have been destroyed since the TR4 strain of Panama disease, a type of Fusarium wilt, first appeared in Asia in the 1990s, according to Wageningen University in the Netherlands.

A different strain of Panama disease decimated another common banana variety known as Gros Michel in the 1950s, leading producers to switch to Cavendish, which was then resistant, according to the university.

“The Cavendish variety has been very successful in fighting against this disease we must acknowledge, but this is a biological cycle,” Dusunceli said. “For any crop, once we develop a cultivar, then the disease develops more aggressive pathogenic strains against that crop in time. Sometimes it takes a few years, sometimes it takes decades.”

Scientists are working to develop new varieties of bananas that might be resistant to the TR4 strain, “but until that time we just recommend that countries take phytosanitary measures carefully to try to contain the disease,” Dusunceli said.