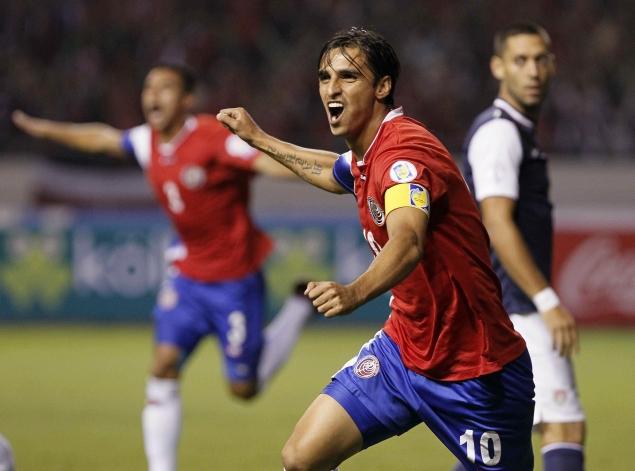 (AP) — Despite qualifying for the World Cup with the best defensive record in CONCACAF, Costa Rica is still a heavy underdog to get out of a group containing England, Italy and Uruguay.

Costa Rica will be appearing in its fourth World Cup, but merely picking up a point or two will be difficult against three teams near the top of the FIFA rankings with seven World Cup titles combined.

In 2006, Costa Rica qualified for the World Cup in Germany, with their worst World Cup to date, finishing 31st out of 32 teams.

[/su_column]Knocking one of the European giants out of the World Cup and matching its achievement of reaching the round of 16, which happened in 1990, would be a major accomplishment.

“We love (the group),” Pinto said after December’s draw. “The braver the bull, the better the bullfight.”

Pinto has said over and over — maybe trying to convince his players — that his defense is up to the challenge of stopping star names like Wayne Rooney, Mario Balotelli and Luis Suarez.

Costa Rica under Pinto has been flexible tactically, but usually plays with three center backs and two wingbacks. Organization and hard work from the whole team was key to only losing twice in World Cup qualifying and conceding just seven goals in 10 games in the final six-team qualifying phase

Goalkeeper Keylor Navas will be vital for the team in Brazil. He plays for Spanish club Levante and has been one of the best keepers in the league this season, earning praise in March from Real Madrid coach Carlos Ancelotti.

PSV Eindhoven forward Bryan Ruiz is Costa Rica’s creative spark and perhaps its best-known player after his spell at Premier League club Fulham. The 28-year-old Ruiz will be charged with providing chances for young striker Joel Campbell, who is on loan from Arsenal to Greek club Olympiakos.

Everton left back Bryan Oviedo is another important figure, but he is in a race to be fit for Brazil after breaking his leg in January.

The team’s opening game against Uruguay on June 14 in Fortaleza holds extra meaning for Costa Rica. The South Americans defeated Costa Rica 2-1 on aggregate in 2009 in the intercontinental playoff for the 2010 World Cup, keeping the Central Americans out of the final tournament.

QCOSTARICA - Six out of ten people in Costa...
Crime