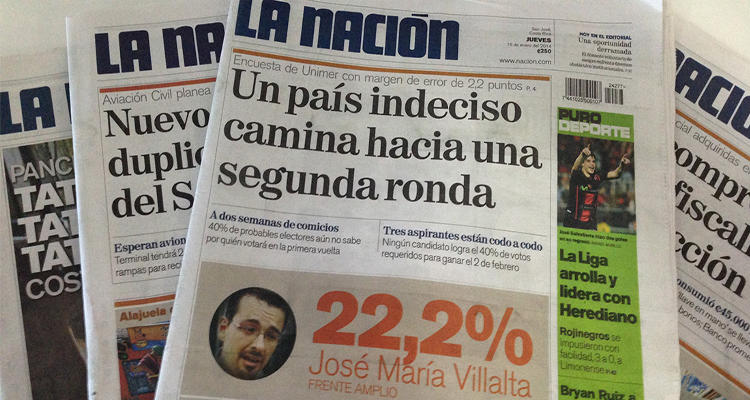 The president of Unimer, Carlos Paniagua, assures that the survey results were ready in time, and it was the decision of the client, La Nacion, not to publish.

Paniagua, speaking on the live radio show “Nuestra Voz” this morning, said the survey with the latest election results was ready in time as per the contract, but they (La Nacion) decided not to accept it.

Monday night, La Nacion’s managing director, Yanancy Noguera, said the newspaper had suspended the publication of the survey as the results would not be ready before the 29th (Wednesday), the last day before the elections tribubal (TSE) ban on election politicking.

With the decision, the poll results remain closed. Paniagua explained that the survey was taken on behalf of La Nacion, under an exclusive contract it has had with the newspaper for the last 24 years, and cannot be sold to or purchased by any other company or media.

The Unimer president told the radio audience that his company’s polls have served to warn of reality.

“In December 2001 we called that there would be a second round and everyone jumped on us…”, said Paniagua.

In the 2002 presidential elections, Abel Pacheco received 38.6% of the vote: just short of the 40% needed to avoid a runoff. On 7 April 2002, in the second round – the first time the mechanism had been used since the rules were introduced – Pacheco got 58% of the vote, beating Rolando Araya (brother of Johnny Araya) by a narrow margin.

For 2014, Paniagua expressed his personal opinion, a runoff election is inevitable.