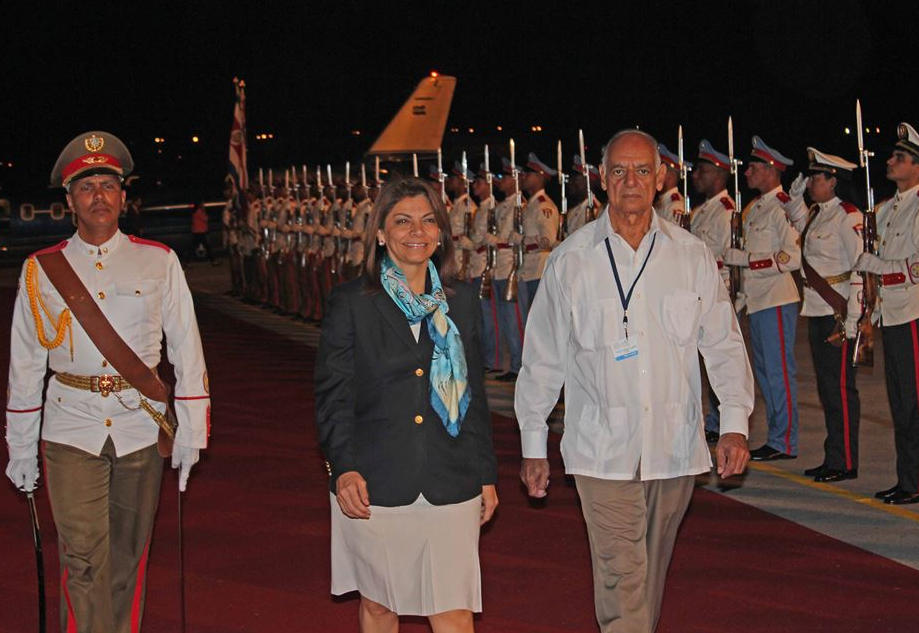 “Almendrones”, as they called in Cuba, are the American made vehicles before the sixties (in the country prior to the revolution) and circulating among the modern vehicles of today.

Costa Rica’s Foriegn Minister, Enrique Castillo, preferring to drescribe the current Cuban government as “an evolving system”, instead of calling the Castro rule a dictatorship.

Being the diplomat, Castillo said it is not Costa Rica’s position to point Cuba’s human rights problems.

Laura Chinchilla is the first Costa Rican president to visit Cuba since the revolution of 1959, some media calling it a “thawing” of the diplomatic ice, a process started by her predecessor, Oscar Arias, when in 2009 he restored diplomatic relations with the island nation,

Last night, on her arrival, Presidenta Chinchilla was received with military honours.

Once again the Presidenta hitches a ride from a foreign government. Doña Laura arrived on a Honduras government plane, hitching a ride from the Honduran Ministro de Cultura,  Rafael Bernal. The Presidenta was in Honduras for the inauguration of that country’s new president on Sunday.

“I bring you a loving and affectionate greeting for the Cuban people from the people of Costa Rica. I appreciate the opportunity to be here…”, was the message by the Presidenta.

Chinchilla will be handed the CELAC 2014 presidency by Raul Castro during the summit.