Urban Train Left Without Conductor With The Resignation Of Guillermo Santana 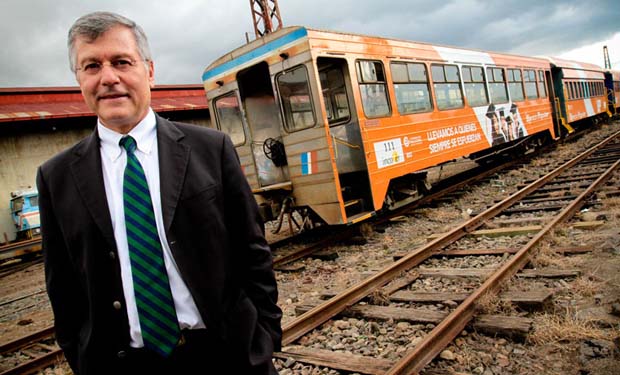 (QCostarica) As of this morning, the urban train of the Greater Metropolitan Area (GAM) has no conductor, following the resignation of Guillermo Santana over the weekend. Santana cited personal reasons for stepping down as president of the Instituto Costarricense de Ferrocarriles (Incofer).

Santana has been at the conductors controls of the Incofer since Solis took office as President and has been responsible for the expansion of the commuter train service that now includes service to Rio Segundo de Alajuela and the passing of the bill (on April 26 and signed into law on June 28) allowing the Incofer to obtain US$408 million dollars in financing of its modernization plans, that includes the “Tren  Eléctrico Interurbano” (electric train) project

Santana has also had to answer questions overthe constant (almost daily) collisions involving the train, and the worst of all, a head-on collision of two trains earlier this year.

President Solis expressed satisfaction and took time to recognize the efforts and dedication by Santana to find a solution to public transport problem gripping the country.

Details of the Santana decision and his potential replacement are expected today, Monday, July 18 at a press conference that President Solis says will also be assisted by the Minister of Transport and Public Works (MOPT).

The Incofer is an independent government agency and does not answer to the MOPT.

QCOSTARICA - If you see the new trains running these days,...
Read more

QCOSTARICA - Loans in dollars, which had a great boom in 2000, began to slow down since 2016 and today, despite the fact that...
National

QCOSTARICA - For their preparedness to face tsunamis, the communities of Tamarindo and Sámara were recognized by the Junta Nacional Tsunami Ready de Costa...
San Jose

QCOSTARICA - Public worker unions from the Education, Health, Judiciary, Transport, and public universities, among others, will join forces this Friday, March 5, in...
San Jose

QCOSTARICA - After a year of no work, engineers, technicians, producers, cleaners, food and beverage personnel, among others, held a peaceful march this Thursday...
Guatemala

Q24N - Guatemala on Tuesday received 200,000 doses of the vaccine against covid-19 donated by India, which it will use to complete the immunization...
Economic Recovery

QCOSTARICA - Consumer pessimism decreased slightly for February 2021, compared to November of last year, however, uncertainty around the economy remains high and the...
Travel

QCOSTARICA - A total of 24 travelers, so far, face problems with the law when discovered trying to leave Costa Rica, through the San...
Front Page