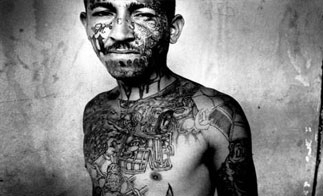 The latest designations bring the number of El Salvadoran gang members blacklisted by the United States for forming part of international criminal organizations to ten.

The three join the seven MS13 members who have already been named transnational crime figures by the US federal government, on June 5, 2013. On October 2012, the Treasury Department had named the Salvadoran gang as transnational criminal organization (TCOs), pursuant to Executive Order 13581.

This article was originally published by La Prensa Grafica on April 17, 2015, and was translated and edited for clarification, and reprinted with permission. See Spanish original here.

Mendoza Figueroa, Canales Rivera and Erazo Nolasco are imprisoned in El Salvador and were among the gang members transferred out of maximum security prison Zacatecoluca, as part of the 2012 truce between MS13, the Barrio 18, and the government of President Mauricio Funes. Erazo Nolasco and Canales Rivera were convicted of kidnapping, while Mendoza Figueroa is serving time for aggravated murder, weapons possession and illicit gang affiliation.

Between April 15 to 16, El Savador’s Justice and Pubic Security Ministry sent Erazo Nolasco and Mendoza Figueroa back to Zacatecoluca, as part of the new government’s reversal of the gang truce. 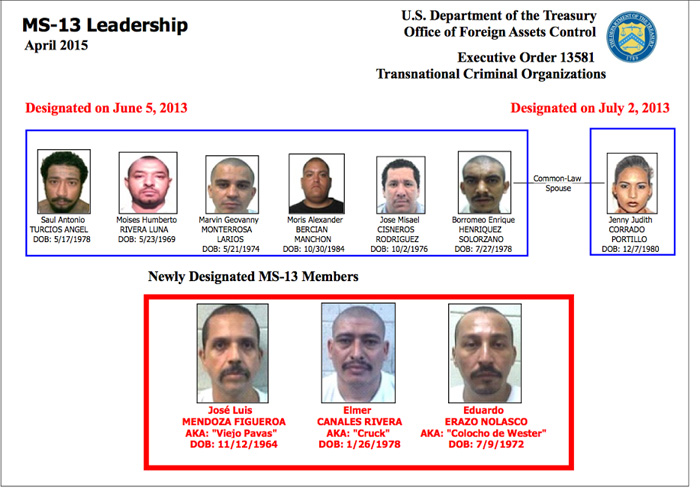 According to the Treasury Department, the three gang members are part of local cells — or “cliques” — created in the United States. These cliques make up the MS13’s basic structure.

“Local MS13 cliques take direction from the group’s foreign leadership for strategic decisions involving moves into new territories and efforts to recruit new members,” the US federal agency said in the OFAC press release. “Money generated by local MS13 cliques in the United States is consolidated and funneled to the group’s leadership in El Salvador.”

OFAC says Mendoza Figueroa is a founder of the Mara Salvatrucha and a member of the Seven & Eleven Locos clique. Erazo Nolasco belongs to the Western Locos and Canales Rivera to Hollywood Locos. All these cliques were created in Los Angeles, California, during the 1990s.

Federal law enforcement agencies have been closely following MS13 activity since the late ’90’s, when the Central American gang began migrating from Los Angeles and Southern California to other US cities – particularly the East Coast.

Since 2012, the same time the administration of ex-President Funes was managing the gang truce — which almost halved El Salvador’s homicide rate over a six-month period that year — the Treasury Department launched a diplomatic offensive via its OFAC list.

The immediate effect of the designation is that the gang members’ US assets may be frozen and people who conduct financial business with them or their associates can be punished with fines from $250,000 to $1 million, as well as up to 20 years in prison.

Last year the Obama administration, via the OFAC, listed another Salvadoran as an international criminal. Washington accused Jose Adan Salazar Umaña, alias “Chepe Diablo,” a businessman from northern city Metapan, of heading an international drug trafficking group. He was punished with the same restrictions now being applied to the gang members and their associates.

In the case of the MS13 members, it is unlikely that their leaders have assets or money that the United States may seize, according to an analysis by the US Department of State. “Transnational street gangs were involved in street-level drug sales but not major trafficking as part of the logistics supply chain for Mexican, Colombian, and other drug trafficking organizations,” the State Department said in its 2012 report on drug trafficking in El Salvador.

Financial transactions mainly occur in small amounts and are carried out by gang members’ relatives who live in Central American communities within the United States. “Yes, there are money transfers and extortion activity, but we haven’t seen transactions above $2,000,” said a source in Montgomery County’s anti-gang police unit in Maryland, who spoke in exchange for anonymity.