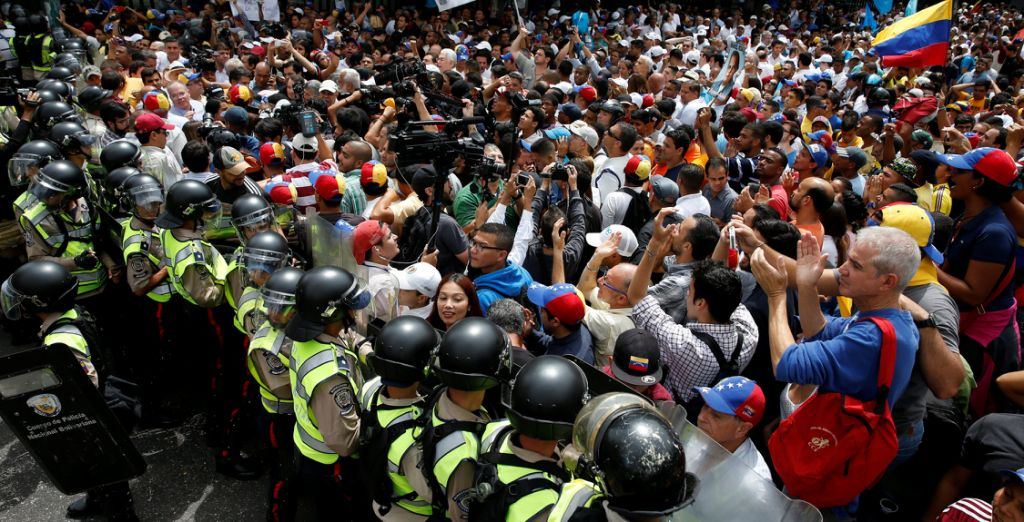 Venezuela’s government has touted the achievements of a militarized security operation that began a year ago, but many experts say it hasn’t reduced crime and is in fact generating a greater number of human rights abuses.

Venezuela Minister of the Interior, Justice and Peace Gustavo González López presented the results of the Operation Liberation of the People (Operación de Liberación del Pueblo – OLP) July 13, exactly one year after he announced the creation of the joint police-military operation.

López said the OLP has dismantled 157 criminal groups, “a great number of which are dedicated to paramilitary activity under the structure of organized crime,” reported El Nacional. He added that a total of 2,399 suspects have been arrested, and 1,492 weapons have been seized during the past year.

The OLP “has significantly mitigated crime rates in the zones and places in which the principal groups operate,” he said.

The minister also said that a recent poll showed 82 percent of Venezuelans approve of the OLP.
InSight Crime Analysis

The government’s praise for the OLP runs in sharp contrast to criticism leveled by security experts and observers. Kemyer Ávila, a professor of criminology at the Central University of Venezuela, said the OLP operations have been “counterproductive, because they are increasing institutional violence.” According to Ávila, 445 people have died as a result of OLP activity.

“This concept of being prepared for war has not served to diminish criminality, and there is no better evidence than what we are experiencing,” he said.

Concerns about the OLP’s negative impact on human rights abuses began immediately and have continued over the course of the past year. At least 17 people were killed during the OLP’s initial raids in July 2015. In April of this year, Human Rights Watch published a report documenting several cases of alleged extrajudicial killings by OLP forces.

It is somewhat more difficult to pin down the OLP’s effect on crime rates. Proponents say the OLP has brought down violence, critics say it hasn’t, but it is next to impossible to know for sure since the government routinely withholds data on crime indicators. Venezuela’s murky system for reporting on its security situation has even made it difficult for researchers to accurately estimate the number of violent deaths in a given year, one of the few crime statistics that can be counted with a relatively high level of certainty.

QCOSTARICA - Almost a million people aged 58 and over, throughout...
Read more

Casino and baccarat is a term of love. Gambling is known...
Read more

QCOSTARICA - Searching for a consensus candidate in the Partido Liberación Nacional (PLN) for the 2022 presidential elections, is the intention of two-time former...
Health

QCOSTARICA - The downward trend of new cases continues. With that the number of people in hospital, numbers not seen since July last year. This...
Coronavirus

The number of reported global weekly COVID cases is falling and has dropped nearly 50% this year, the World Health Organization (WHO) said overnight....
National

QCOSTARICA - A member of the board of directors of the Instituto Costarricense de Acueductos y Alcantarillados (AyA) - water utility - Yolanda Acuña...
Costarica History

On May 4, 1910, the most destructive earthquake in the history of Costa Rica destroyed the city of Cartago. Such had been the devastation...
The Americas

Q REPORTS - On Thursday, February 11, through a virtual broadcast, Costa Rica encouraged the region to join efforts to end the deprivation of...
Business

HQ - The Costa Rican rafting company, Ríos Tropicales, closed permanently due to the economic impact of the pandemic after 35 years of operations. "As...
Health