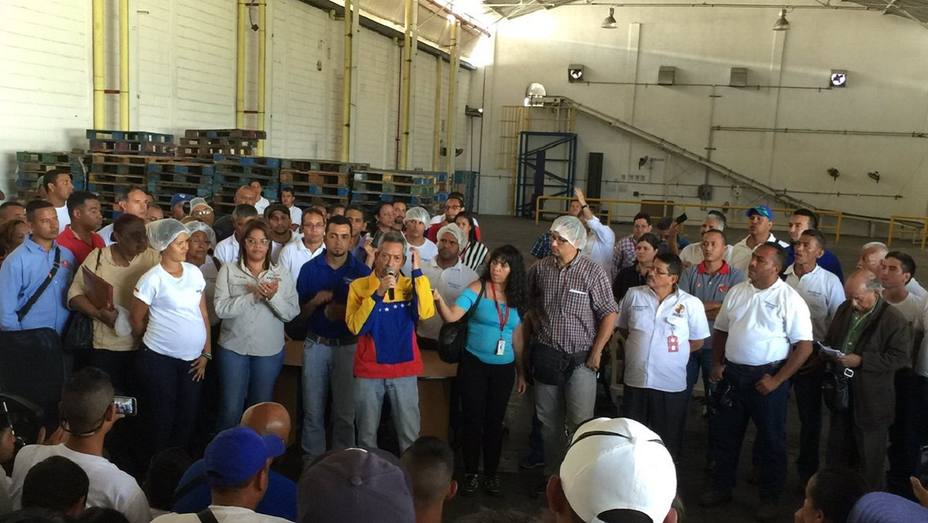 Labor Minister Oswaldo Vera claimed the Venezuelan government would protect employees of US personal care company Kimberly-Clark, which recently announced an indefinite halt in operations in the country due to the current economic crisis.

During a broadcast on Monday on state-run TV channel Venezolana de Televisión (VTV), Vera monitored the seizure of the plant, located at the San Vicente sector of Maracay city, north-central Aragua state. There, they activated the manufacturing plant of sanitary napkins, among other personal care products.

This move resulted from the enforcement of Article 149 of the Labor Organic Law, which reads that in the event of unlawful shutdown of a company and upon its employees’ request, the Labor Ministry is authorized to order takeover and resume the plant activities to protect the employees’ rights.

Read more of what’s happening in Venezuela at TodayVenezuela.com

To Survive in Venezuela, Multinationals Slash Operations and Payrolls to Bare Minimum

Employees sometimes wait up to 10 months to return to work...
Read more

Tarek El Aissami, governor of the Venezuelan state of Aragua and...
Read more

QCOSTARICA - Though the number of new cases daily of covid-19 has been "stable" this past week, the contagion or R rate rose to...
HQ

QCOSTARICA - In total, 19 cantons in six provinces maintain a high risk of contagion by COVID-19, according to the last update from the...
Today Costa Rica

QCOSTARICA - Costa Rica is on the verge its seventh consecutive week with a decrease in new cases of covid-19. Between Saturday (February 20)  and...
Politics

QCOSTARICA - Legislator Ricardo Benavides lashed out on Tuesday that in the midst of the efforts to advance with the covid-19 vaccines the Government...
Trends

Recruitment is a prolonged process for any organization that consumes both effort and time. Even though almost 82 percent of the recruiters prefer a pre-assessment...
Travel

QCOSTARICA - Passengers passing through the Juan Santamaría International Airport, or San Jose airport (SJO), will have a more agile and secure shopping option...