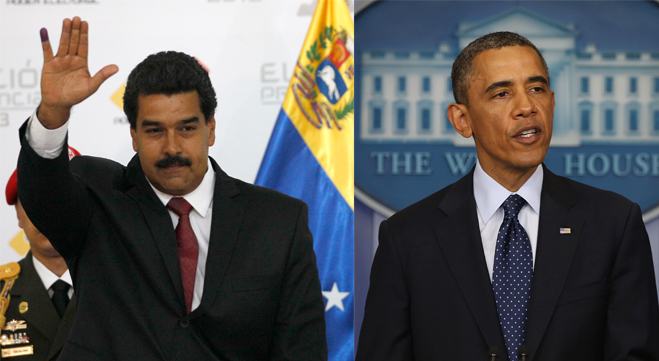 Venezuelan president Nicolas Maduro said it derailed a plot to kill him, arresting two hitmen it said wanted to assassinate the leftist leader on orders from a Colombian conservative ex-president in a plot involving U.S. President Barack Obama and Costa Rica.

In other statements Maduro charged that “extreme international right wing elements” were behind the alleged plot.

Despite the reports by AFP of Maduro’s statements, Venezuela has offered no evidence to verify the existence of such a plot, which Maduro charged was hatched in a meeting in Costa Rica.

According to the TicoTimes, Maduro challenged Obama to clarify if he ordered or knew of the ‘conspiracy.” He attributed the alleged plot to political enemies with ties to Miami and Colombia and added that the “epicenter” of the plot was in Costa Rica at a meeting in May.

“We will have to follow up on this matter, but in principle it seems absurd,” Roverssi told La Nación.

According to the Huffington Post, Maduro himself called on US President Barack Obama to say if he ordered or knew of the alleged assassination plan.

According to AFP Maduro not only incriminated Costa Rica and the U.S. President but also political groups supporting the late Chilean dictator Augusto Pinochet and Colombia’s former President Alvaro Uribe. The latter refused to comment on the “infamy” to a Colombian TV station, likening the accusation to similar statements made by Cuba’s Fidel Castro and Chavez himself.

Maduro charged that he “has proof” that the plot was hatched by “a terrorist group led by (Cubam anti-communist Luis) Posado.” In 1976, Posado was accused by Venezuela and Cuba of being the brains behind the bombing of Cubana Airlines commercial flight that killed all 73 persons aboard.

Venezuelan opposition leader Henrique Capriles dismissed the plot with, “Due to their inability to govern, they look for distractions and talk of assassination.” Capriles, who still disputes the results of the April election to replace Chavez, lost by 1.49%.

The pair, Victor Johan Guache Mosquera and Erick Leonardo Huertas Rios, were part of “a group of 10 men who were coming to carry out the murder of the president,” working with former Colombian president Alvaro Uribe, Rodriguez charged.

The pair detained were part of a support team for a “highly experienced hitman” identified by the alias David, whom they reported to directly and who was to personally carry out the assassination, the minister said.

“We have no doubt that Alvaro Uribe Velez has knowledge of all these things … And we are not the least bit surprised that he is the one giving orders through operatives,” Rodriguez alleged.

The Colombian ex-president, who held office from 2002-2010, vehemently denied the plot, branding the allegations “slurs.”

In an interview with Colombian television, Uribe said he would rather talk about “important issues and not the slurs of the dictatorship.”