Venezuela’s Maduro travels to China in search of fresh funds 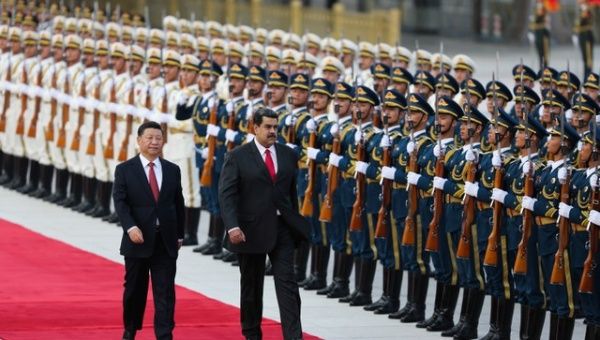 “I am going with great expectations and we will see each other again in a few days with big achievements,” the leftist leader said on Wednesday in a state broadcast from the airport, without providing details.

Venezuela’s Information Ministry did not respond to a request for comment.

China’s Foreign Ministry said Maduro would visit from Thursday until Sunday at the invitation of President Xi Jinping.

“Recently, the Venezuelan president has actively pushed forward economic reforms, and there has been a positive reaction to these from society,” ministry spokesman Geng Shuang told a daily news briefing.

“I think that a Venezuela that is steadily developing is in everyone’s interests. China has faith that the Venezuelan people and government will be able to handle its domestic affairs with the legal framework,” he added.

“This visit by President Maduro is beneficial to both sides’ mutual trust, to push forward cooperation, to expand ties between the two countries and to promote Venezuela’s development.”

Chinese state-run newspaper the Global Times said in a Friday editorial that some had claimed Maduro’s government would have collapsed without China’s support.

“They clearly underestimate the Maduro government’s capabilities. It should be noted that the government has quite a few supporters and its political foundation is not as vulnerable as the Western media describe,” it said.

The two countries have long had friendly ties and cooperation has been “steadily progressing” in all fields, the ministry cited Wang as telling Rodriguez.

CNPC said on its website that Zhang told Rodriguez, who was also accompanied by a vice president of Venezuelan state oil firm PDVSA, that he hopes both sides continue to work harder to deepen cooperation in the oil and gas sectors.

The company cited Rodriguez as saying she hopes CNPC can help Venezuela boost output and move the cooperation to a higher level.

CNPC is a major investor in oil and gas exploration in Venezuela and also a top lifter of Venezuelan oil under the government-to-government loans for oil deals.

Over a decade, China ploughed more than $50 billion into Venezuela through oil-for-loan agreements that helped Beijing secure energy supplies for its fast-growing economy while bolstering an anti-Washington ally in Latin America.

The flow of cash halted nearly three years ago, however, when Venezuela asked for a change of payment terms amid falling oil prices and declining crude output that pushed its state-led economy into a hyperinflationary collapse.

Venezuela’s finance ministry in July said it would receive $250 million from the China Development Bank to boost oil production but offered no details. Venezuela previously accepted a $5 billion loan from China for its oil sector but has yet to receive the entire amount.

Local consultant Asdrubal Oliveros, who tracks Chinese loans closely, said on Wednesday Venezuela was close to clinching a fresh loan of $5 billion to finance oil projects. Beijing was waiting for Maduro to announce a series of economic measures, including a steep devaluation and more flexible currency controls, before extending fresh funds, Oliveros said.

Q24N - The recent summit of the Community of...
Central America