by Q24N
8 July 2016
198
Share
Facebook
Twitter
Pinterest
WhatsApp
Linkedin
ReddIt
Email
Print
A 2012 law that allows Venezuela’s air force to shoot down aircraft on suspicious flight paths reflects a policy that is being implemented at a high cost with few rewards and in clear contrast to the country’s professed humanist values.

On May 16, a group of F-16 fighter jets of the Venezuelan air force took off from El Sombrero airbase 350 km southwest of Caracas, at 8 p.m. Their mission was to intercept an unidentified civilian aircraft on a suspicious flight path that originated in southern Venezuela’s Apure state and headed north to the Caribbean Sea.

“Visual, visual, it is dying out,” responded the pilot, presumably referring to an aircraft they had just attacked off the coast of Falcón state, in the western Venezuela.

“Forty-three miles in the 230 … Trying to communicate with Guard. Guard, Dragon … If you copy, aircraft crashed,” asked the controller.

“Crashed no, disabled,” the pilot responded.

“I confirm: aircraft disabled,” the controller repeated, adding coordinates in an apparent attempt to verify the location.

“Affirmative,” responded the squadron leader, “approximately some 10 miles north of the coast, off the towns of Puerto Gutiérrez and Canape.”

The squadron returned to the airbase it had taken off from in the state of Guárico, in central Venezuela.

The military dispatched no search and rescue team that night, or in the following days. The country’s Aeronautic Rescue Service was not informed of the incident. The authorities’ inaction is notable given that “the state is obliged to order a crash site visit” after an aircraft has been shot down, according to aeronautic law professor are retired Col. Cesar Sanchez.

News of the incident and its possible consequences prompted the mobilization of people from Guatemala and Colombia who claimed to be relatives of downed aircraft’s occupants. They were eventually identified as 26-year-old Eduardo Andree del Aguila, of Guatemala, and Colombian Juan Camilo Lopez, 22. They were both training to become civilian pilots.

According to reports, Del Aguila and Lopez departed May 15 from Puebla, Mexico, and flew to Apure, stopping over in several Central American countries. The young pilots’ families said they were coerced into making the trip, and accompanied by an unidentified third person.

No sign of the young pilots has been found. A week after the incident, Venezuela’s National Guard did find an abandoned Cessna 421 aircraft registered in Mexico on a coastal flat in Falcón state. It is unclear if it is the same aircraft flow by Lopez and Del Aguila, or perhaps someone else who was flying the same route on a later date.

The US State Department and United Nations reports on drug trafficking have consistently highlighted the use of Venezuelan territory for the transshipment of illegal drugs.

Venezuela’s Defense Ministry reported the detection of 93 irregular aerial intrusions into Venezuelan territory in 2015. During that period, five aircraft were disabled, four were seized and two reportedly crashed. In the ministry’s vernacular, those aircraft went down in the “attempt to evade surveillance systems,” Defense’s euphemism for being shot down. 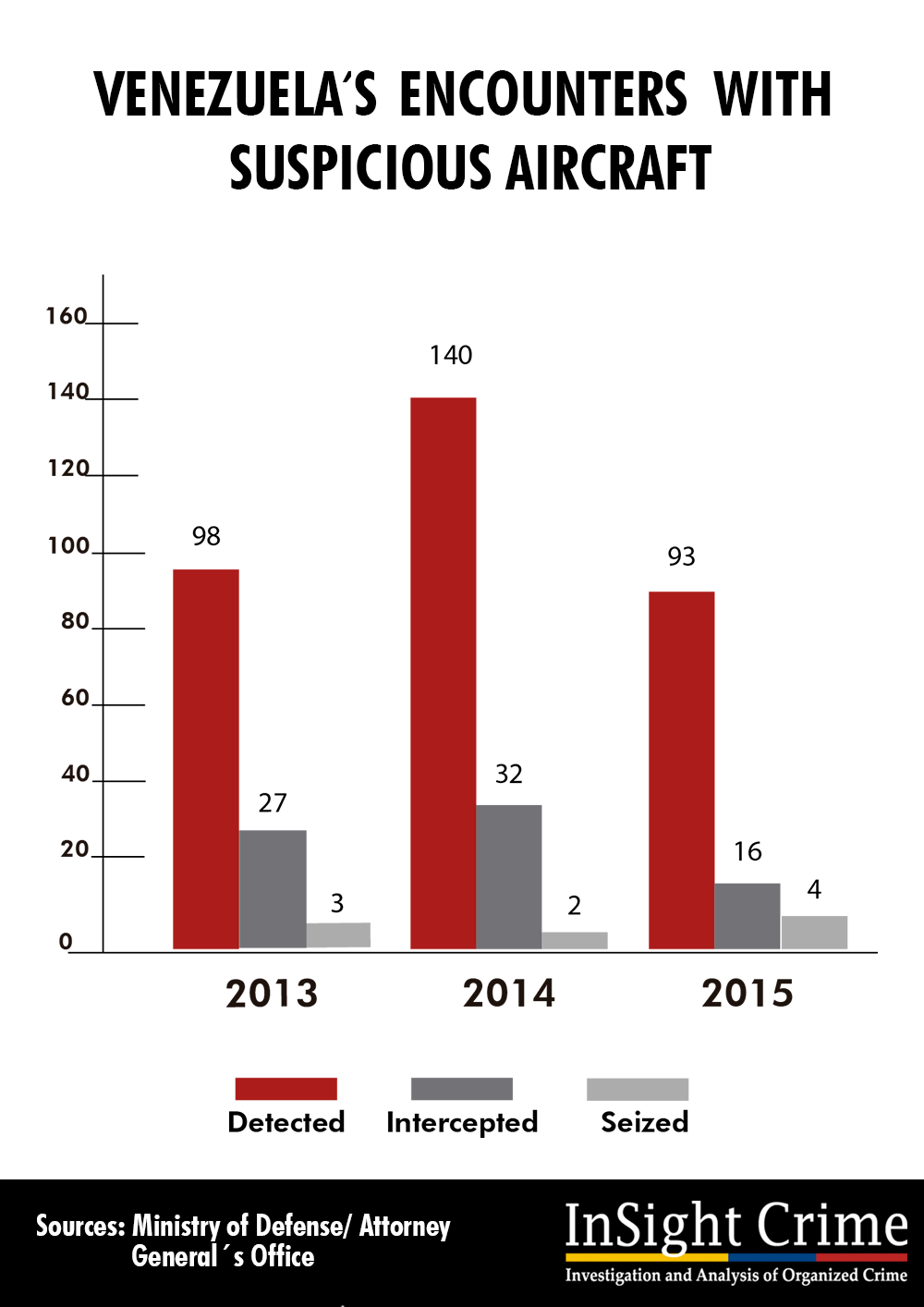 The US Joint Interagency Task Force South, based in Key West, Florida, closely monitors these flight paths. Layering of the flights’ paths as they appear on the radar screen shows a concentration of departure points in the southern part of Venezuela’s Apure state, near the border with Colombia. The southern end of Lake Maracaibo and Falcón also light up, but with lower intensity.

“These aircraft take off and land at clandestine airstrips located in the Venezuelan Plains and in the state of Bolivar, which are very sparsely inhabited areas. Any pilot that is more or less experienced can do that job,” said a former general commander of Venezuela’s Military Aviation, retired Div. Gen. Regulo Anselmi.

The aircraft tend to fly to the beaches of Honduras or, less frequently, to Hispaniola, the island shared by Haiti and the Dominican Republic.

“Venezuela is one of the preferred illegal drug trafficking routes, mostly for cocaine, from South America to the Caribbean region, Central America and the United States,” says the US State Department’s 2015 International Narcotics Control Strategy Report.

In response to international pressure, Venezuela began in 2002 to evaluate the possibility of using fighter jets to intercept suspicious flights. The late President Hugo “Chavez proposed that the planes should be shot down,” recalled Anselmi. “The commander of aviation at the time was Gen. Arturo Garcia. We explained that this could not be done.”

Anselmi said Chavez consulted other advisors and learned of no-fly zones that had been created by the United States in the Middle East. “He ordered that legislation be drawn up” to create such zones in Venezuela, the retired general said.

The resulting legislation was approved 10 years later, in June of 2012: Law of Control for Integral Air Space Defense. The results of this legislation are becoming evident, despite opposition to the shooting down of civilian aircraft within the military aviation sector.

Col. Sanchez, the legal expert, said the shooting down of a civilian aircraft is supposed to be a last resort, following a number of less drastic measures. The first is to warn the pilots that they are “outside their route” using an emergency radio frequency. The verbal warning should be followed by visual signals, and if the aircraft does not alter its course, warning shots should be fired in an attempt to force the offending aircraft to land at the closest airstrip.

Sanchez characterized the institution of a shoot-down law by a government that espouses “democratic and humanist” values as a fundamental contradiction. He said the primary mission of military aviation is to “protect civil aviation,” rather than attack it.

Anselmi agreed that every interception operation entails “the possibility of committing acts at odds with human rights.”

“One could say that it is better to let them pass, and avoid the risks and the costs,” Anslemi said. “We are wasting time and money on this, and the country is not being affected. But it is a duty that we assumed as part of the global society in which we live.”

Until 2015, interceptions of aircraft were made public by Defense Minister Vladimir Padrino. Anselmi notes, however, that Gen. Padrino often did not accurately describe these events. Anselmi recalled cases in Apure and Guarico which were described as shoot-downs when the ruins of the aircraft clearly showed that it had been burnt on the ground rather than crashing.

The Mexican government has requested official information on at least two encounters between civilian and military aircraft. In December 2014, Mexico’s deputy secretary for Latin America and the Caribbean, Vanessa Rubio, asked the government of Nicolas Maduro for precise data on two Mexican registered airplanes that were reportedly shot down in the Elorza area of Apure.

Div. Gen. Manuel Andara, a former general inspector of Military Aviation, said the use of fighter jets to intercept civilian aircraft also entails risks inherent in low altitude flight for military pilots. He recalled that in September 2015 a Russian-made Sukhoi 30 jet crashed in Arauca as its pilot tried to intercept a civilian aircraft. The two pilots were unable to eject and died when their $42 million jet hit the ground.

Read more on Venezuela at TodayVenezuela.com

QCOSTARICA - Costa Rica's new twenty rojos* bill was rolled out, circulating in the country on Thursday. And though they may be flashier, made...
Read more
Coronavirus

FINANCIAL TIMES - Qantas plans to insist that passengers on international flights have been vaccinated against Covid-19 before boarding its planes once any jab...
Health

QCOSTARICA - A man named García, a resident of Osa, in the southern zone, underwent a penis amputation on Wednesday in an attempt to...
Redaqted

Travel to the United States in a pandemic; what you should know

CORRECTION: Costa Ricans do not have to quarantine as was indicated in the original report. QCOSTARICA - It is not uncommon for many Ticos to...
Dollar Exchange

QCOSTARICA - The dollar exchange fell ¢10.38 this week as a result of the traditional sales of foreign currency made by companies to pay...
Cuba

Western Union closes in Cuba due to U.S. sanctions

(Q24N) The financial services company Western Union closed its operation in Cuba, this Monday, November 23, forced by pressure from the Donald Trump administration,...