QCOSTARICA – Those who live in, as those who have visited Costa Rica know that the country is one of the worst to drive in. Now there is irrefutable proof.

According the first Global Driver Satisfaction Index by Waze, the world’s largest community-based traffic and navigation app, published on October 1, Costa Rica is tenth worst country to drive in.

Scores ranging from 10 (satisfying) to 1 (miserable) were assigned after examining 50 million Waze users in 32 countries and 167 major city areas.

Worse than Costa Rica with aa score of 4.5 are:

The Waze Global Driver Satisfaction Index were based on six key factors:

What is the best country to drive in?

Waze says the Netherlands with a score of 7.9.

Rounding out the top 10 countries to drive in, according to Waze are: 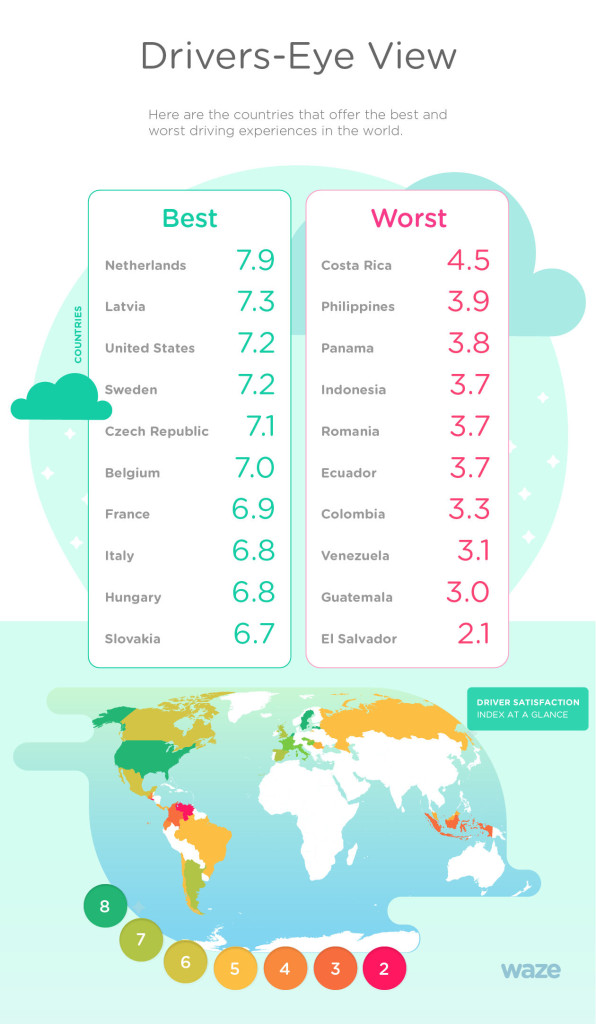 The Netherlands, Slovakia, Sweden, and Czech Republic all reported an easy, breezy driving experience in the Top 5. Believe it or not, the U.S. and France have some of the lightest traffic in the world thanks to smaller cities with appropriate infrastructure that’s easy to navigate.

Costa Rica placed 7th of the worst countries for traffic, ahead of Panama the 6th worst.

On a city level, Manila reported the worst traffic on Earth, with Rio de Janeiro, Sao Paulo, and Jakarta not far behind.

When it comes to worst cities for drivers around the world, no Costa Rican city made the top  (worst) ten list. However, four Colombian cities did – Cali (2), Medellin (3), Bucaramanga (7) and Bogota (10).

Waze says it will reveal more details of the Global Satisfaction Index Driver in the coming days.