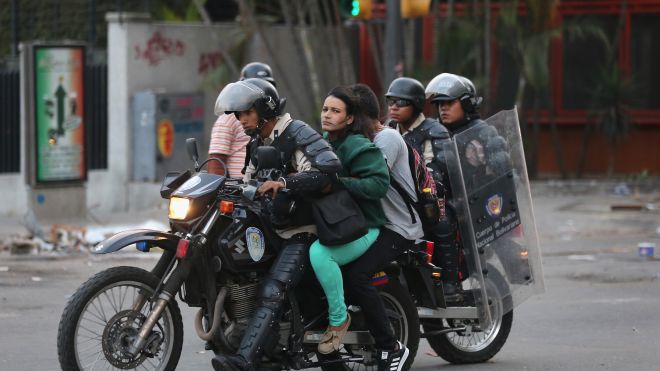 TODAY VENEZUELA – Over 100 police officers have been killed just in Caracas so far in 2015. However, in the last week of September violence against police officers in Venezuela took on new dimensions with five grenade attacks in three days.

The most brazen was an attack on the Baruta Municipal Police in eastern Caracas when men on motorcycles threw two grenades at a temporary checkpoint (“alcabala”) injuring eight officers and four civilians. There were also against the headquarters of the investigation police CICPC near Caracas, a station of the Guarico State police, and a station of the Miranda State police.

News portal EfectoCocuyo.com has counted at least 27 “incidents involving the use of grenades” since January this year.

This article was originally published by Venezuela Politics and Human Rights and is reposted with permission. See the original here.

On September 30 Attorney General, Luisa Ortega Diaz, said that her office is investigating the attacks and focusing on the origin of the explosives since the hand grenades are believed to have been obtained Armed Forces ammunition depots.

Opposition leader Capriles Radonski has publically asked the Minister of Defense, General Vladimir Padrino Lopez, to explain how it is possible that hand grenades, supposed to be in the sole possession of the armed forces, are finding their way to the hands of private citizens on the streets.

Police officials have speculated that the attacks have to do with the apparent injury or death of Jose Antonio Tovar “El Picure” a criminal gang leader shortly before the attacks. Tovar’s band is known to have been behind a grenade attack on July 5 against a police station in Aragua State.

Indeed the government is arguing that these attacks demonstrate the effectiveness of the Operacion Liberacion del Pueblo. National Assembly Deputy Fredy Bernal said because they are being hit hard “criminal organizations have given the order to attack against police forces.”

When President Nicolas Maduro returned from the United National General Assembly he said the attacks were acts of right-wing terrorism. “While I was away in New York, defending peace and the sovereignty of Venezuela, the right went crazy.”

- Advertisement -
Paying the bills
Previous articleIn Panama 3 Out of 10 Women Depend On A Man To Survive: UN Report
Next articleBogota Airport Officials Involved in Crime Ring