What’s for breakfast in Costa Rica? 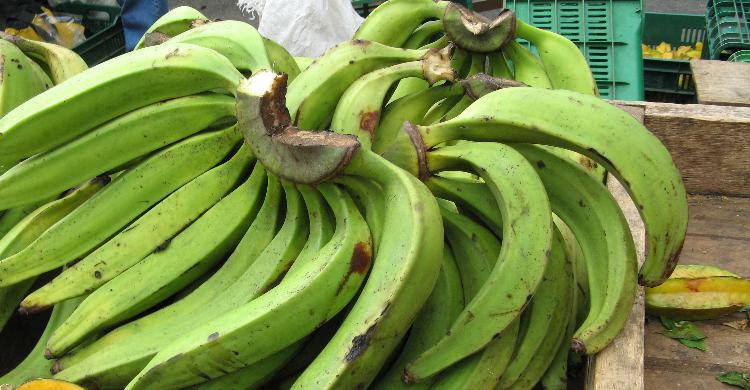 The other day my husband went shopping and bought platanos (plantain in English), or cooking bananas. If you are in the habit of checking all the displays in your produce section, you have seen them. They look like oversize bananas with skin that is streaked with brown, or green skin, or sometimes totally-brown skin. These guys are not intended for Bananas Foster or a sundae. They are, as we would say in Guam, cooking bananas.

One of my family’s humorous stories is that back in the Sixties, sometime after we had moved to Guam, my mother asked a friend what was the difference between cooking bananas and “eating bananas.” The answer was that you cook with cooking bananas, and the eating bananas are for eating. Well, that wasn’t much help.

It’s ironic that I learned how to handle platanos from the great and all-knowing Chef Alton Brown of the Food Network. He featured bananas on one episode of Good Eats, emphasizing Southern Banana Pudding and platanos, which we also know as Plantains.

So, taking my cue from Brown, I followed his method, and here it is. Go ahead and buy a platano at your local Tucson supermarket–I have seen them at Fry’s as well as Whole Foods and Sprouts.

The platano will be large and hard. Cut off the two ends (at an angle if you wish) and then run the knife blade vertically down the whole length of the fruit. After that you can peel the whole skin off like a jacket. Now you have a whole, peeled platano.

Cut the platano into rounds, either at an angle or straight across. You might want to dredge them in cornstarch or flour–I think Brown did that–but I didn’t have them, so I went ahead without it.

Set the platano slices aside on a plate and put your large skillet over medium heat. Add some oil and/or butter and let it heat up for a few minutes. Then place your platano slices in a single layer in the skillet (one platano will provide the number of slices that you can work with) and let them get browned on one side.

Turn the slices over when they have browned to an appetizing degree, but watch them because there is a quantity of sugar in all bananas that can burn. Once the slices are turned over, let them brown again and then you are almost ready to serve.

Just before you remove the slices to a serving plate, take a large spoon or other sturdy tool and flatten the platenos so that their edges open up. This final touch proves to you that they are cooked through, because if they don’t want to flatten out, then the starchy body of the fruit is not yet broken down.

Once the slices are absolutely ready, you can sprinkle them with brown sugar, as I did, or drizzle them with maple or caramel syrup, or salt them, or whatever sounds good. This is a very versatile breakfast food–treat it as a starch, according to the original hard texture of the plateno.

I had a sauteed egg for breakfast this morning, with platano slices on the side. Along with Costa Rican Cafe Moderno, I don’t think you can beat this little piece of paradise. We must keep platanos around from now on, both here for the short term and then when we get back to Tucson.