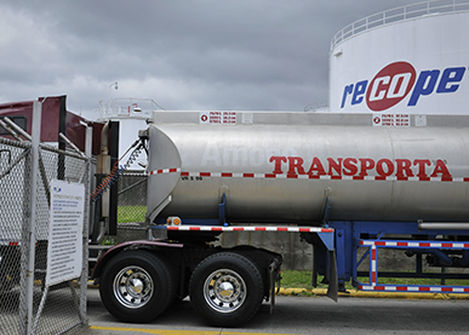 QCOSTARICA – With world crude oil prices at the lowest in decades, why are Costa Rica´s prices at the pump so high? In the United States, in some areas prices are at us$2 per gallon and lower but Costa Ricans have yet to see any benefit.

La Nacion asked this question and not only found out why but revealed that they can hope for little relief.

The country gets the best break on wholesale crude in the region — US$118.32 per barrel. This gives an encouraging starting price of  US$0.74 per liter, a much lesser quantify than a U.S. gallon. But from there it’s all down hill.

The reason is that this is just over half the price to the consumer. The catch is that the tax placed on the fuel is also the highest in the region. Thus, US$0.74 per liter is magically transformed into US$1.40 when it goes into your tank. (The price does fluctuate a little, dropping when the price of crude goes down, the only variable.

Panama pays the highest price for its crude, $124..02 per barrel, but also sells it a the lowest price in the region: $1.07 per liter. La Nacion found out that this country’s subsidies and taxes make the difference. (For the reporters to obtain this data, we have to thank Costa Rica’s transparency — in Nicaragua it’s a state secret.)

So let’s take a look at the taxes, which averaged US$0.45 per liter last year. It accounts for 2% of the Gross Domestic Product, about ¢390 billion colones. And, according to deputy Finance Minister Fernando Rodriguez, it’s vital.

“We can’t lower this tax without compensating for it in another area,” Rodriguez told the paper. But still another factor keeps the price at the pump high–Aresep, the public utilities watchdog agency, was given power in 2008 to manipulate the price to provide a subsidy to keep price down in other areas.

Monday, La Nacion disclosed that new beneficiaries of Costa Rican mobility are asphalt for the roads and LPG cooking gas users. Fortunately, this is only 1% of the retail prices of gas and diesel. But the high cost of the refinery itself is paid by drivers, about 5.4%, compared with 2% in other Central American countries.

RECOPE has announced a ¢6 billion colon cut in its expenses for this year. Luis Carlos Solera told La Nacion, “There are always opportunities to improve.” Amen to that, brother!