Why Did the US Release One of Guatemala’s Biggest Drug Traffickers? 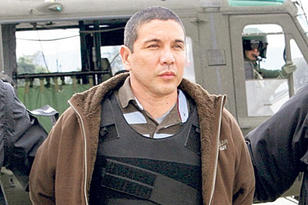 CENTRAL AMERICA NEWS – Records show that the United States quietly released Guatemala kingpin Otto Herrera nearly a year ago, hinting at the possibility that the cocaine trafficker has struck a deal with authorities. According to the US Federal Bureau of Prisons (BOP) website, Otto Herrera Garcia – once one of the most-wanted drug traffickers in the world before his extradition to the US in 2008 – was released from prison on October 8, 2013.

Although the release occurred nearly a year ago, it was just recently brought into the public eye by Guatemalan news website Soy502. A BOP spokesman told the website that Herrera had been “freed from his sentence,” but that it was possible he was still in the custody of another government agency. A US Department of Justice (DOJ) spokesman, meanwhile, told Soy502 there was no information “publicly available” about Herrera’s current location.

Prensa Libre reported that Guatemalan authorities planned to request information from the US about the early release.

Herrera, a Guatemalan national, was arrested in Colombia in 2007 and extradited to the United States in February 2008 on charges of drug trafficking and money laundering. As of 2011, the BOP reported he was due to be released in 2017, according to Soy502.

In 2004, the USDOJ called Herrera “one of the biggest drug traffickers in Central America.” His organization served as an intermediary between the remains of Colombia’s Cali Cartel and Mexico’s Sinaloa Cartel. According to the US Department of State (DOS), he was responsible for transporting more than 18 tons of cocaine up through Central America and Mexico into the US beginning in 1998. Case records show he also sent millions of dollars in wire transfers from Mexico to the United States, some of which was used to buy airplanes from a US company.

He has been linked to Guatemalan businessman and political broker Gustavo Herrera (not related), who allegedly helped Otto Herrera’s organization move and store drug shipments.

Herrera has proved a slippery figure: in 2004, he was captured in Mexico, but while the United States was busy developing an extradition request, Herrera quietly snuck out of jail disguised as a policeman, after paying off prison staff.

The US Drug Enforcement Administration (DEA) refused to comment on Herrera’s case to InSight Crime when consulted in an interview about Guatemalan crime dynamics last March. However, the brevity of the time he spent in US prison may have been the result of a deal with authorities, in which he provided information in exchange for an early release. Cooperation deals are common for extradited drug traffickers, and if this is indeed what happened, Herrera is likely just one of many Guatemalan traffickers who will follow this path. Other possibilities include Horst Walther Overdick, Otto Turcios and Walter Montejo (at least two of whom were allegedly linked to Herrera and, incidentally, were arrested during his time in the US).