Why is bus service so bad on the Nicoya-San José route?

by Maria Fernanda Cruz, Vozdeguanacaste.com – As the sky opens up and rain pours down, the roof above my seat on the bus from San José to Nicoya also is raining. Water drips on my head, on my clothes and on my computer as if we were outdoors. I open my umbrella.

“What can we do, go on strike?” a frustrated rider, Marietta Díaz, asks as she waits for the driver to fix yet another problem.

But filing formal complaints over these types of problems often entails navigating cumbersome bureaucracy at the Public Transportation Council, or CTP, and the Public Services Regulatory Authority (ARESEP). Worse, official responses to those complaints rarely come in a timely fashion.

When riders like Díaz do follow through with complaints to the CTP, which oversees public transportation contracts, the best outcome they can hope for is a “stern warning” for the company – not a fine.

“The only punishment that exists (from the CTP) is canceling the concession, and that’s only happened once in the country’s history. And that was because the bus caught fire,” said former Transportation Vice Minister Sebastián Urbina, a day before he was dismissed from his post by the president. 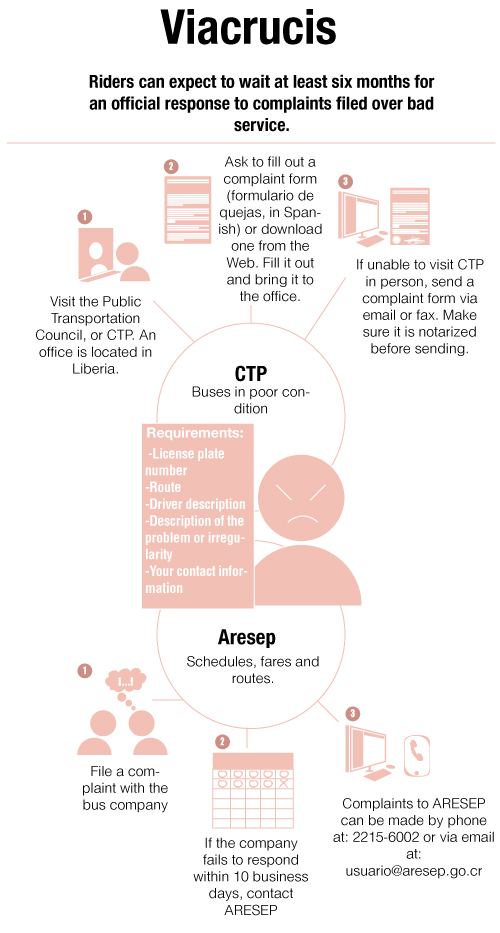 According to Urbina, current regulations do not allow the council to impose sanctions on licensees, apart from cancelling contracts. In order for that to happen, a company must have accumulated at least three complaints from users.

The CTP’s board of directors, which renews or cancels concessions, also is composed of the same licensees, such as bus company and taxi owners, relegating them to both judge and jury in disputes.

Meanwhile, the concession holder of the San José-Nicoya route, Transportes Alfaro, insists that its buses receive constant maintenance, although a spokesman acknowledges that some of the buses have problems.

Company spokesman Germán Alfaro said the company’s fleet of buses is replaced every 15 years as required by current legislation, and there is no reason to cancel the company’s contract.

“The bus with the leaks, the Chirriche, was repaired last week. And the driver is monitoring it to make sure there are no new leaks,” Alfaro said.

What can consumers do when public transportation providers fail to comply with contract requirements?

Bus riders have two options: Contacting the CTP or ARESEP.

Exercising this right, however, can be a significant hassle for consumers, who must first report complaints to the responsible company. If the company fails to respond in 10 business days, the consumer can then go to ARESEP (see infographic).

ARESEP spokeswoman Carolina Mora said only two complaints were filed against the company Alfaro since 2013. In both cases, the company was fined from ₡2 million ($3,700) to ₡8 million ($14,800), the maximum allowed by law. Resolving these types of complaints can take at least six months and up to a year.

“If complaints don’t leave the bus stop, how is ARESEP going to know about bad service?” Mora asked during a recent telephone interview.

QCOSTARICA - Don't freak out, expecting any less would be living...
Read more