Why Ticos Are Called Ticos

TICO BULL – What is “Tico”? is a great article by Jennifer Rich on Ticolingo.com, about the origin of the word “Tico”, referring to Costa Ricans.

So, What is Tico? 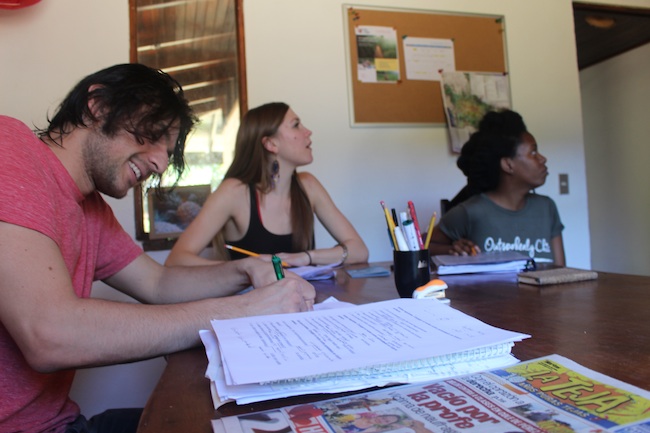 It was my first day of class at Tico Lingo. I was nervous, excited…everything in between. I had just landed from New York twelve hours prior with nothing more in my vocabulary than “hola” and “bueno”. To say the least, having an understanding of what “tico” meant was way beyond me. After a healthy dosage of the best coffee on the planet, the class started with some Costa Rican essentials — “Pura Vida” and “Tico”.

First Day of Class at Tico Lingo”Tico” quickly fascinated me and became one of my favorite terms during my trip. Upon reading the term, I hadn’t a clue what it meant. Is it a city? Maybe an accent? In reality, “Tico” is basically a term that Costa Ricans affectionately use to describe themselves and the things around them. Just as Felix was a ‘German’ and Kima was a “Canadian”, Freddy, our professor, was a “Tico”. Likewise, it can be added to adjectives to make them sound cute, affectionate, and little (more on this later). 🙂

Delineation
Tico is an idiomatic term used for a native of Costa Rica. Costa Ricans are usually called ticos by themselves as well as by people of other Spanish-speaking countries.

“Tico” and “tica” (male and female) are colloquial terms that Costa Ricans gave themselves, due to their linguistic tendency to add the diminutive “tico” to the end of words. For instance, in standard Spanish ‘un poco’ means ‘a little’, the diminutive is “un poquito” (a little bit), but Costa Ricans often say “un poquitico.”

What is unique to Costa Rica is the use of this suffix to also denote affection. Words ending in -ico, -ica, -tico, -tica do not only mean “small”, but they also depict affection and similar endearing feelings too.
Origin
About a century ago, many Costa Ricans made the linguistic mistake of forming the diminutive by adding an “-ico”to the end of words. And so, poquito (pronounced like po-qui-toe), the Spanish diminutive of the word poco; meaning little or few, became poquiTICO when spoken by a Costa Rican. Because of their friendly and warm-hearted manner, the people of Costa Rica commonly used the diminutive in their everyday speech patterns and thus earned the nickname “ticos” from outsiders.

In Spanish, this diminutive form (formed by dropping the final ‘o’ or the ‘a’ and adding an ‘ito’ or ‘ita’ depending upon the gender) is commonly used out of friendliness and familiarity. For instance, doesn’t it sound much more affectionate and easygoing to call your amigo (friend) an amigito (little friend)? 😉

My homestay Mom used to say “¡hola mi chicatica!” meaning “Hello my little girl!”. I began doing it with everything! “Perritico” (little dog), “Pizzatica” (little pizza) and “cafético” (little coffee). Over time, the mistake became celebrated as a way for Costa Ricans to define their own style of the Spanish language. While studying in Heredia, you will absolutely hear this style throughout town!

QCOSTARICA - After two years without the possibility of...
Rico's Digest