Will it Bend? iPhone 6 Takes A Turn For The Worse 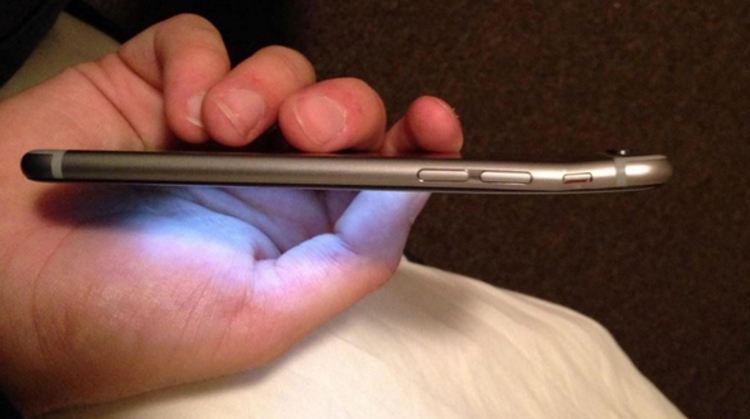 The new iPhone 6 and iPhone 6 Plus may be thinner and larger, but reports are emerging that the aluminium construction has left some users bent out of shape.

AFTERBIZLIFE – No, this is not made up, and certainly not a design feature either, the iPhone 6 Plus is a bender.

Apple has sold millions of new iPhone 6 and 6 Plus phones this week, but the joy of owning the new gadget is already waning for some owners who are discovering the devices can bend when left in their pockets, or subjected to force.

A user posted a photo and note to the popular Apple-focused MacRumors website, describing what happened after a long day with his new phone in the pocket of his trousers.

The user says he drove four hours to a wedding, sat through the ceremony, and then drove home. That meant the phone was in his front pocket for about 18 hours, during most of which he was sitting.

“As I lay it on the coffee table and sat down on the couch to relax from the drive, I saw the reflection of the window in the iPhone slightly distorted,” the post reads. The photo shows the silver phone, bent near the volume buttons.

This post was followed by similar images from other forum users complaining of the same problem, and Twitter has since lit up with talk of “bend-gate” and pictures of unintentionally curved iPhones. One dedicated iPhone 6 Plus owner even posted a video showing how quickly the device could be bent when pressure was applied.

Tech blogger Lewis Hilsenteger decided to test his phone’s bendability for himself, by applying pressure with his fingers and thumbs.

Even though Hilsenteger applies pressure in the middle of the phone, it mostly bends around the area where the buttons are.

“It’s basically the limits of physics and engineering,” tech expert Carmi Levy told CTV’s Canada AM Wednesday about the 6 Plus phone that measures 7.1mm in width. “You get this really big device with this a big screen and you make it super thin and you make it out of traditional materials like aluminum and at some point something is going to give. So if you bend it hard enough at some point it’s not going to bend back.”

Levy has some advice for people interested in buying one of the new iPhones.

“If you are going to buy a device like this, don’t buy it without a case,” he said. “And watch your jeans, if they are a little bit on the tight side, when you sit down you might want to take the phone out (of your pocket).”

- Advertisement -
Paying the bills
Previous articleWhat Traffic Light?
Next articleCosta Rica Tourism Is Being Promoted in France And Brazil