Hawaii was the first place to commercially cultivate the pineapple and Costa Rica is one of the world's top producers thanks to its tropical climate. 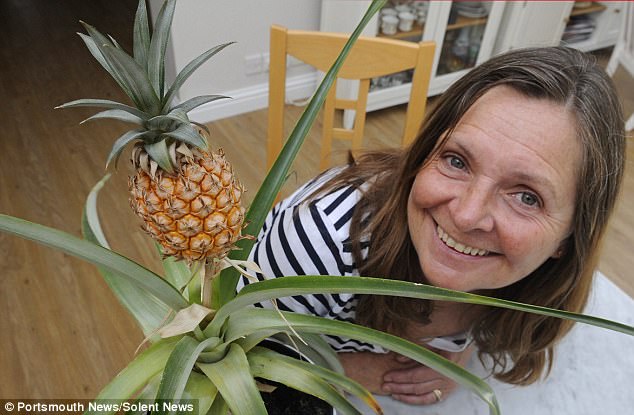 It was ten years before she saw the fruit of her labor, successfully growing a pineapple after keeping the top of the tropical plant for a decade at the recommendation of a friend.

Tracey Aldridge, 56, told the Daily Mail in the UK she was stunned to discover a pineapple finally growing on the plant, which she has kept in her conservatory for the last 10 years. 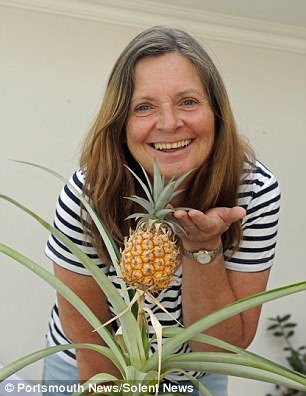 “When preparing a fruit salad, a friend recommended she keep the top of the pineapple and another would grow from it,” said Aldridge.

Aldridge said, though skeptical, she kept the top and left it in water, before the plant rooted and she moved it into a pot in her conservatory. The semi-retired science technician, of Gosport, Hants, said: ‘It all started in 2007 when I had my best friend Donna over – we were having fruit salad and I was chopping some pineapple.

‘I was about to throw the top away when she told me to keep it because another pineapple would grow out of it.

‘I’ll be honest, I was a little skeptical, but I popped it into the conservatory anyway.

‘When it rooted, I moved it into some potting compost and let it be, really.

‘I suppose having a conservatory does help it to grow, but nonetheless, it does seem quite bizarre, because of where pineapples are usually grown.

‘The pineapple is only about 7cm with the leaves measuring around 16cm.

‘It’s a miniature pineapple and it smells delicious but I don’t have the heart to eat it.’

Typically grown in South American countries. The growth of a pineapple in the UK is relatively rare.

The pineapple plant, which is indigenous to South America, is believed to have been introduced to Hawaii in the 1500s. 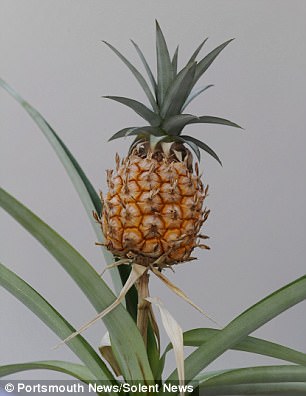 Hawaii was the first place to commercially cultivate the fruit and Costa Rica is one of the world’s top pineapple producers thanks to its tropical climate.

Gardening expert Brian Kidd said Tracey had, possibly inadvertently, presented a masterclass in British pineapple growing. He added ‘You can get pineapples to grow if you are lucky enough to be able to get one with green growth on the top, that the retailer hasn’t removed.

According to Kidd, winters are a big problem for pineapples, because if the temperature falls below  4 degrees Celsius (40 degrees Fahrenheit), the plant can suffer.

“She has done everything correctly and deserves a lot of credit for that. I would personally like to send Tracey my congratulations. If she can get growth again next year then she could end up with another baby pineapple – if she does that, it will be quite the achievement,” said Kidd.

Aldridge said she did not give the pineapple plant much attention during the winter as she has a holiday home in the French Alps where she usually stays.

She added: ‘I could end up with a pineapple farm one day – that would be quite remarkable.’

QCOSTARICA - The crisis in Ukraine due to the invasion of...
Read more