Would you live better if you moved to another canton?

Have you ever wondered if you would live better if you moved to another neighborhood, municipality or canton?

QCOSTARICA – Have you ever wondered if you would live better if you moved to another neighborhood, municipality or canton? To one where there are not only better opportunities for economic prosperity for its residents, but also better education and health conditions to be able to develop and do what you consider important with your life.

This is what is known as sustainable development, a practice in which each country promotes the economic prosperity of its inhabitants, but does so beyond calculating the Gross Domestic Product (GDP), it contemplates social welfare and taking care of the environment, too.

To measure it, the Índice de Desarrollo Humano Cantonal (IDH) – Cantonal Human Development Index, is used, a study that has been carried out since 2006 by LA DATA CUENTA to measure the reality of all the cantons of Costa Rica.

Do you want to know how many development possibilities you have in the canton where you live and compare them with those of another place? This data visualization will help you find out

Determining whether a community offers better or worse living conditions for its inhabitants depends on three factors:

Those cited are the criteria used by analysts at the University of Costa Rica (UCR), in partnership with the United Nations Development Program (UNDP).

How developed is each canton for its inhabitants? This is measured by the UN on a scale of 0 to 1. However, for the purposes of this publication, a value of 0 to 100 was assigned, where a canton that exceeds 80 points has high human development. Meanwhile, one that reaches between 50 and 80 points, offers a medium development. Finally, a canton with less than 50 points has poor living conditions for its inhabitants.

In Costa Rica, there are no cantons with low development: all of them exceed 50 points. It has also been increasing the amount that they provide an environment with high opportunities for their residents.

Who moves faster in human development?

There are significant gaps in the life opportunities that the cantons offer their inhabitants. If, for example, the cantonal human development were a short pool swimming competition, Santa Ana would take the gold medal and break all records, crossing it in less than 7 seconds. But for Matina, traveling the same distance would take almost 32 seconds and would come in last place. 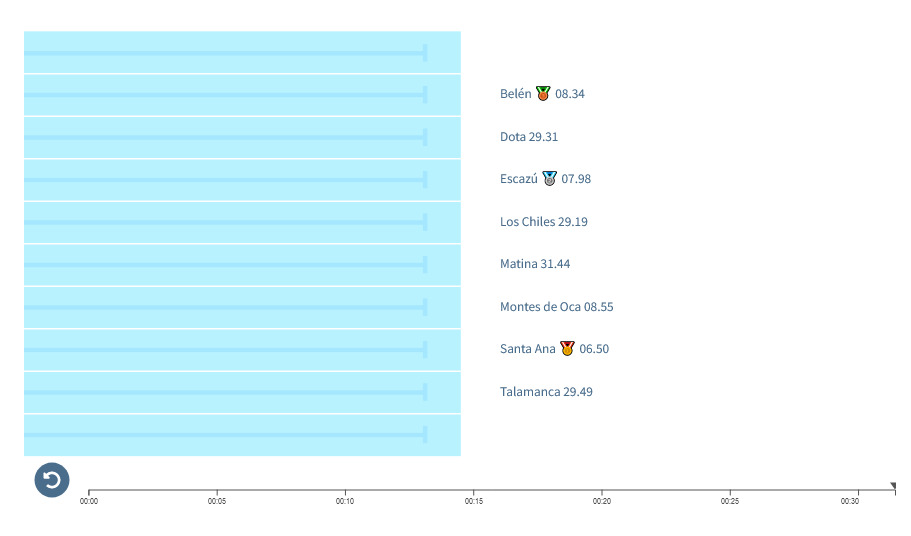 Why does this data matter?

That there are data and indicators created with statistical and methodological rigor on the progress or setbacks of the 82 cantons of the country, in terms of human development, is vital to design better public policies that meet the pressing needs of the people who inhabit them.

“The Atlas de Desarrollo Humano Cantonal (Cantonal Human Development Atlas) is an instrument that allows the design and orientation of effective public policies that respond to the particular needs of the different communities, such as the reduction of poverty and the generation of decent employment that cannot be resolved on the basis of intuition or assumptions”, he pointed out,

In this data visualization, you can observe the changes and evolution that the cantonal Human Development Index has had since 2006. 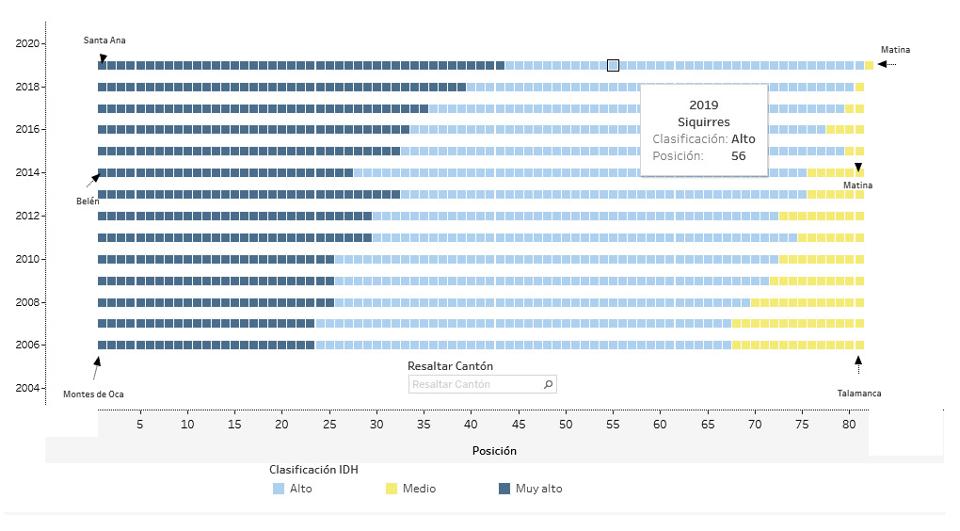 For example, in 2006 the number of cantons with average development was 14. Today, only Matina persists in that condition.

Translated and adapted from the article by Hassel Fallas published at Ladatacuenta.com. Read the original article, in Spanish, here.

- Advertisement -
Paying the bills
Previous articleCosta Rica would need 91 years to achieve parity between men and women
Next articleSome recommendations to starting a jewelry store.

QCOSTARICA - The Institute for Research in Economic Sciences...
Political Economy