1.32 Million Tourists Visited Costa Rica In First Half of the Year 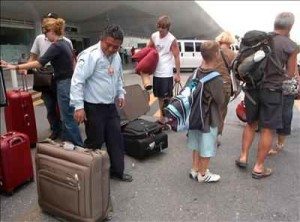 A total of 1.32 million tourists arrived in Costa Rica in the first six months of 2013, which is an increase of 2.7% over the same period last year, according to data provided by the Instituto Costarricense de Turismo (ICT).

The majority of the visitors from January to June arrived at the Juan Santamaría international airport in San José, followed by the Daniel Oduber airport in Liberia, while the remainder arrived by land at the Peñas Blancas (Nicaragua) and Paso Canoas (Panama) borders.

According to Dirección General de Migración y Extranjería (immigration) records, the month with the lowest number of arrivals was May.

The Minister of Tourism, Allan Flores, said that among the most important aspects of the data is the rebounding of emerging markets such as China, Mexico, Brazil and the United Kingdom.

Flores noted that the growth for the second half of 2013 is expected to stay close to the World Tourism Organization estimates of between 3% and 4%.

QCOSTARICA - The judicial file of the Cochinilla Case, on alleged corruption in road works, exposes how three companies would have covered up the...
Travel