Aresep Study To Determine How Many Bus Users Across the Country

Knowing exactly how many people use the public bus every day and thus learning the requirements of each route, is what the  Autoridad Reguladora de Servicios Públicos (Aresep) hopes to achieve with a study that began earlier this month.

According to the ARESEP, the information to be obtained by the study is to establish “operational variables” ie. the size of the fleet, schedules, frequency and the cost of the fares. 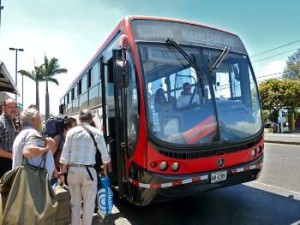 The second phase will involve analyzing the 266 routes between Santiago and Palmares de Alajuela, that is expected to be carried out in 2014.

“The country needs better information for decision-making and reduce the temptation of bus companies to report inaccurate data on the number of people they move and avoid manipulation by unscrupulous users,” said Enrique Muñoz, ARESEP Transportation manager.

By Amy Gdala, Guest Contributor - The US has a surplus of vaccines, while Costa Rica is struggling to supply sufficient numbers to citizens...
Quepos

QCOSTARICA - The multipurpose national stadium, the first modern sport and event arena to be built in Central America, located La Sabana. The stadium was...
Economic Recovery