TODAY PANAMA  On April 1, 100,000 construction workers could go on strike if the Construction Chamber and the Labor Ministry keep refusing to solve their demands on the signing of a collective agreement. In a TV interview the secretary general of the Union of Construction Workers and Similar, Saul Mendez, said every member of that body, the most powerful in the country, are called for a general strike that day. 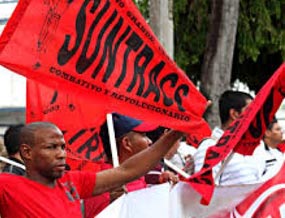 He recalled the strike will be effective 32 days before the general elections scheduled for May 4, in which people will elect a new President, mayors and deputies.

Mendez announcement occurred a day after workers left a negotiation table with the Panamanian Chamber of Construction to sign the new collective convention that will rule the industry until 2017.

Directors of the Chamber said they are willing to increase the salary of the workers, but not to the levels they demand. Nevertheless the Chamber has not presented a counterproposal.

QCOSTARICA - Osta Rica has been the epicenter of regional diplomacy in recent days. The successive visits of the Secretary of State of the...
Nicaragua

QTECH - Whether due to the global economic crisis caused by the Covid-19 pandemic or due to shortages of electronic components, raw materials, factory...
Coronavirus

(DW) Jon works for the local government in the US state of Virginia. The 40-year-old received both his COVID shots in April. Most of...
HQ