15 Horses Rounded Up in Samara and Sent to Slaughter 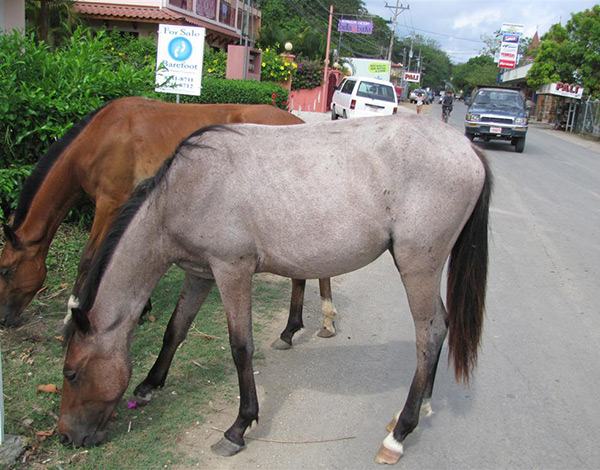 By By Arianna McKinney / Voice of Nosara

At midnight on Wednesday, April 17, the National Service of Animal Health (SENASA- Servicio Nacional de Salud Animal) entered Samara with four vehicles, one truck, and two Public Force patrol units from Liberia to roundup animals wandering lose in the streets, and by 4:30 a.m. on April 18 they had loaded up 15 horses into the truck and shipped them off to a slaughterhouse in Alajuela, where they were sacrificed the following Monday, April 29.

According to Dr. Harold Marin Esquivel, regional director of SENASA, 13 of the equines were adults and 2 were foals. The use of resources for the operation came after repeated warnings that owners should not let their animals wander loose. Marin noted that the animals cause accidents and they defecate on the beaches, thus endangering public health.

In February of 2011, the former police chief, Jose Angel Gomez Matarrita reported to VON that animals had caused at least seven accidents in recent months. For example, in November 2010, an Alfaro bus hit two horses, killing the animals and completely damaging the front end of the bus. And this year the Samara police reported that a car hit a horse near Villas Playa Samara, damaging the car and killing the horse.

Law 5346 prohibits animals from wandering in roadways, stipulating that cows, goats, pigs, sheep or horses found in roads, streets, airports, parks or other public places shall be collected or killed, and after being slaughtered the animal products can be delivered to charity if their consumption does not present a risk to human or animal health.

One owner who lost two horses in this roundup was Concepcion “Chong” Diaz Jimenez. Diaz has eight other horses and operates horseback riding tours into the mountains. He said he normally keeps the horses on a property near the mechanic shop in Cantarana, but because of the lack of water at present he has been bringing the horses to his house to give them water, and at 3 p.m. he usually encloses them again, but on April 17 these two horses got loose. Diaz said he never received any warning from SENASA, although he mentioned that the police have talked to him about not working with the horses on the beach, although he is allowed to pass along the beach.

“It affects me a lot because they are animals that one very much loves,” Diaz said, noting that his horses are pampered and that one of the horses had been bought with money that was given to him as a gift by a friend many years ago.

After hearing from the police that the horses would be sent to slaughter, Berit Funke of Animales de Samara tried to find out if the horses were still alive to see if they could be rescued but found that it was too late.

“They are innocent creatures and they teach us so much about the free life in peace with nature,” Funke wrote on the Animales de Samara Facebook page, where she posted information about the roundup and called for a change in Law 5346. Funke said she is hoping a bigger rescue organization or a legislator will take interest in the case. Posts about the horses were shared 39 times and received more than 100 comments of support and updates from other people likewise investigating the issue.
For example, Maribel Cordero Solis wrote, “It’s incredible that SENASA commits these crimes.

Sacrificing animals in this way can NOT be accepted. I PROTEST emphatically against this crime.”
And Kristen Cretecos added, “This is such a sad time for Samara. I will always remember the magic of seeing the horses roam freely through town, living peacefully alongside us. I wish you all the best of luck in creating a safe space for horses in the region for the future.”

Dr. Marin acknowledged that a woman from Samara contacted him about rescuing the horses but noted that for this to happen the animals would have to go to a properly registered organization whose facilities have been inspected to insure that the animals will be kept in better conditions and cannot be donated for work, for example on horseback riding tours.

Samara resident Bea Jiron, who spoke with Marin, is now looking into the legalities of creating an animal rescue foundation. The foundation would need to have proper grounds for the horses, including a stable or shelter where the horses can be protected from the rain, as well as enough food and water, medicine, a veterinarian in charge of their welfare and volunteers to help care for them. It would also need to be approved and advised by SENASA and not exploit the animals.

“I have been considering the option,” Jiron told VON. “I am thinking of creating a group, get together and organize some kind of activity to raise money.” But to succeed, Jiron acknowledged that she would need a lot of legal advice and she plans to contact several lawyers that she knows to see if they would be willing to help or perhaps contact law students who might take on the project. If you are interested in helping, contact Jiron at b.jironarias@yahoo.com.

According to Marin, three such roundups have been conducted in Samara, including one last year and one the year before.