Asking for betters wages, equal to those of police officials of the Fuerza Publica, some 250 prison guards of the San Sebastián jail in San José will go on strike Monday. 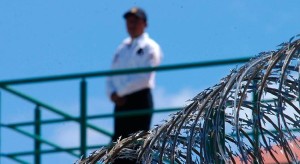 The base salary for a prison guard is between ¢250.000 and ¢260.000 colones (US$500 and US$520) monthly, according to the Asociación Nacional de Empleados Públicos y Privados (Anep), one of the largest of public sector workers unions.

The union leader added that the strike on Monday will be between 7am and 11am, when prison guards will only attend to emergencies. Quirós did not to rule out more work stop action if an agreement is not reached at the February meeting.

Currently ther are 4.000 prison guards working in the country’s 14 prisons.

QCOSTARICA - Costa Rica will have a system called "Interceptor" that will eliminate floating and suspended waste from the upper layer of its waters,...
Economic Recovery