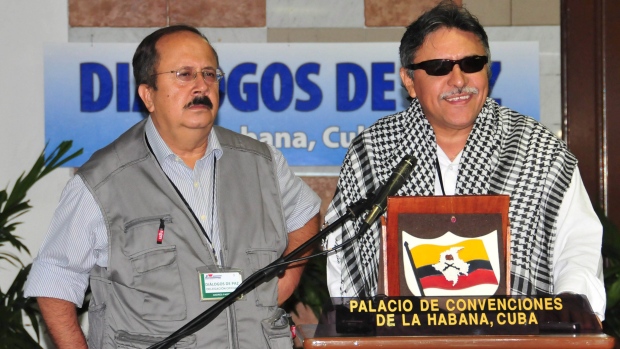 TODAY COLOMBIA – Colombia’s oldest and largest rebel group, the FARC, reached an agreement with the Colombian government to end all illicit drug operations as part of ongoing efforts to seek a deal ending 50 years of violence.

The FARC agreed to “end any relationship” with illicit drugs “that depended upon the established rebellion” as a step towards ending the 50-year armed conflict.

The agreement on illicit drug cultivation and trafficking concluded on Friday and was the third stage of a six-round peace negotiation between the FARC and the Colombian government held in Havana, Cuba.

Delegates from both the FARC and the government agreed in a joint-communication that the cultivation of illicit crops and the subsequent trafficking of drugs has led to conditions of poverty, marginalization, weak institutional presences, and the existence of criminal organizations.

As a solution to illicit drug cultivation, both parties agreed to implement a “National Program for the substitution of the illicit uses of coca, poppy, and marijuana crops.”

“The aspiration is that all growers and the communities in those territories enter into agreements of substitution with the program that will be headed by the President of the Republic,” said President Juan Manuel Santos in a televised speech.

The large remainder of the deal was not disclosed as none of the agreed sub-points come into force until after signing a final peace agreement. Before that, the government has said, the Colombian people get to vote to ratify the peace accord.

“Building a stable and lasting peace requires the willingness of all to contribute to the clarification between the conflict and the cultivation, production, and marketing of illicit drugs, and money laundering arising from this phenomenon, so that drug trafficking never again threatens the country’s destiny,” the joint-statement read.

The FARC is one of Colombia’s oldest groups and one of the longest surviving pioneers of drug trafficking active in the 1970s. Drug trafficking has long fueled the guerrillas’ war against the state.

The conflict, that began in 1964, cost the lives of more than 220,000 civilians according to the government. More than 10, percent of the population has been forcibly displaced from their land.

- Advertisement -
Paying the bills
Previous articleSelling homemade tortillas in the “Las Guayabitas” market
Next articlePresident Solis: “I’m Not In A Beauty Contest, I Must Govern For All”