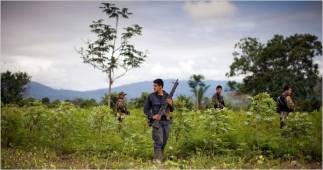 In 2013, the UN confirmed Peru had overtaken Colombia as the world’s number one coca and cocaine producer. How could this happen in a relatively peaceful nation with a booming economy? 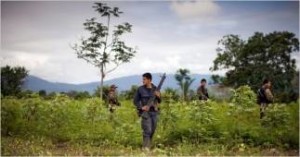 In September, the United Nations Office on Drugs and Crime (UNODC), which releases annual estimations of coca and cocaine production in the Andes, announced that 60,400 hectares of coca were planted last year in Peru, and that the country was now capable of producing up to 340 tons of cocaine. Colombia, the UN noted, registered a mere 48,000 hectares and the ability to produce 309 tons of cocaine.

In a way, the UN numbers were more of a confirmation than a revelation. The United States Government said Peru had taken over the number one position in 2011.

This is actually a return to the bad old days for Peru, which in 1992 produced 60 percent of the world’s cocaine. That changed when then President Alberto Fujimori (now imprisoned on corruption charges) starting shooting down the airplanes that carried coca base to the cocaine labs in Colombia, and the drug traffickers of the Medellin and Cali Cartels began to promote the sowing of coca in Colombia. By the year 2000, Colombia had an estimated 163,000 hectares of the leaf under cultivation compared to an estimated 43,400 hectares for Peru, according to UN figures.

Now it has reversed again. Here are some reasons why.

The reasons why coca production has shifted south again may have less to do with Peru than with Colombia. Colombia, backed by the US, has deployed huge resources to fumigating and eradicating coca and simply pushed the crops back into Peru, and to a lesser extent, Bolivia. It is a classic example of the so-called “balloon effect” — squeeze one part of the balloon, the air pushes to another part of it.

Colombia, since 1999 and the start of the US-backed “Plan Colombia,” became ground zero for Washington’s war on drugs. The strategy was to destroy the source material, the coca bush, from the air in order to cut a main source of income from both drug traffickers and leftist insurgents who operate in the coca-cultivation areas.

But while the drug crops have been reduced, this has come at immense costs. The enormous amounts of glyphosate and other chemicals sprayed across swathes of the countryside have killed not just the coca but all plant life. Instead of pushing the farmers towards legal crops, the destruction of peasants’ fields has fed the ranks of the Marxist rebels. The strategy is also something of a public relations nightmare, as it hits the weakest part of the drug chain, the coca farmer, who is lucky to make $1,000 producing the same coca base that becomes the kilo of cocaine worth at least $30,000 when it hits the mainland US.

The motors for Peru’s coca-production boom are different than Colombia’s. Peru does not allow for the indiscriminate aerial spraying of coca crops, and like Colombia faces an insurgency that lives off the drug trade. However, unlike Colombia’s Revolutionary Armed Forces of Colombia (FARC) and the National Liberation Army (ELN) — which number between them over 10,000 fighters, across the country — Peru’s Shining Path now counts on less that 500 fighters and is now mainly restricted to one area, the Apurimac, Ene and Mantaro River Valleys, known as the VRAEM, which is just one of 14 major coca growing areas of Peru.

Peru’s coca growers, therefore, operate autonomously and their crop levels have surged mostly because the government’s lack of an integrated anti-drug strategy, insists Jaime Antezana, a drug expert and international consultant. This strategy should include three pillars: alternative development, control of supply (interdiction and eradication), and prevention and treatment. So far, only one has made any significant progress: eradication. Under the Alejandro Toledo government (2000-2006) around 7,000 hectares of coca was eradicated per year. Under the administration of Alan Garcia (2006-2011), that went up to 10,000 hectares. And in 2013, the goverment of Ollanta Humala exceeded its goal of eradicating 22,000 hectares.

Admiral Jorge Valencia ofthe government’s anti-drug agency National Commission for Development and Life without Drugs (DEVIDA) insists the government is progressing on other parts of the strategy. He said that money laundering has become a top government priority, yet very little progress have been made here. The anti-drug government prosecutor, Sonia Medina, said she thinks that up to eight billion dollars in illegal money is being washed through the Peruvian economy with little resistance.

Peru has some inherent weaknesses that also make it vulnerable to wholesale macro-economic shifts of the type that have made it the number producer of cocaine in the world again. One is that of corruption. On the Transparency International scale of 100 denoting full transparency, Peru registers 38, alongside Liberia and Burkina Faso. International intelligence sources in Lima told InSight Crime prosecuting top level drug traffickers is very hard, and that there is persistent corruption at all levels of the judicial system.

Police can be easily bought off, especially outside Lima, prosecutors are often unwilling to take on complex organized crime cases, and judges can be bribed. Corruption scandals are the daily bread of Peru’s newspapers, with a police chief recently arrested accused of working with organized crime in the north of the country, while a raft of congressmen are under investigation for links to drug traffickers; an army general was found to have created a payroll for 620 soldiers who did not exist, instead collecting their pay checks himself.

Ex-presidents Toledo and Garcia are under investigation for corruption. Garcia, who was president twice and is rumoured to be preparing a third presidential bid in 2016, has been accused of selling presidential pardons to drug traffickers at $150,000 a pop at the end of his second administration during which at least 400 hundred convicted drug traffickers received pardons.

Transnational organized crime has also taken root in Peru and, like the Cali and Medellin Cartels in the early 1990s, might be the ones who are fomenting the growth in coca cultivaiton. In an interview with the head of the police anti-drug directorate, the DIRANDRO, General Vicente Romero said that they were tracking the presence of Mexican, Colombian and Russian organized crime syndicates operating in Peru.

With increasing pressure in both Mexico and Colombia, several top level criminals have sought safe climates and have established operations in Peru, officials said. The Sinaloa Cartel is believed to have permanent presence in Peru, centered around the port of Piura, with emissaries in Lima as well. With Peru now providing much of the cocaine headed towards Europe, the arrival of the Russian mafia is no surprise.

In the end, Peru offers much less resistance to international drug trafficking than Colombia at the moment. It is perhaps inevitable that organized crime pay more attention to Peru, where the raw material can be harvested, law enforcement and the judiciary is open to corruption, and money laundering is still relatively straightforward.

QCOSTARICA - The opening of the new section of...
Colombia