“Chepito”, Costa Rica’s and the world’s (unofficial) oldest man could be the deciding vote in the 2014 presidential elections. José Delgado Corrales, at 113 years of age, is one of the centenarians in Costa Rica that are eligible to cast their vote in February 2014. 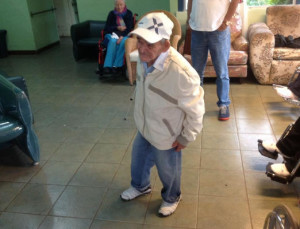 According to the Supreme Electoral Tribunal (TSE), there are in the country more than 600 seniors over the age of 100 that are registered to vote, including Paula Hernández, who his two years younger than Chepito.

Both José and Paula live near each other, he at the Hogar de Ancianos de Piedades in downtown Santa Ana, and she in Pozos (also in Santa Ana, a short distance from downtown).

At the Hogar de Ancianos Santiago Crespo, in Alajuela, the TSE will be installing a modern voting booth, which will also be used by voters of the area. The centre currently has three seniors over 100, and could have up to six centenarians by voting day, according to Rodolfo Zuñiga, director of the seniors home.

Five centenarians voters reside at the Hogar de Ancianos Carlos María Ulloa, in Guadalupe. This seniors home will have their own voting booth.

For most of the centenarians this will not be the first time to cast their vote, some having participated in national politics all their lives.

Zuñiga explains that passion and political fervor of the seniors living on presidential elections are impressive and worthy of imitation.

EXPAT FOCUS (MND) Of course it was no surprise that readers of Mexico News Daily voted Mexico as the No. 1 expat destination in...
Reports