A Bloody Start To Semana Santa 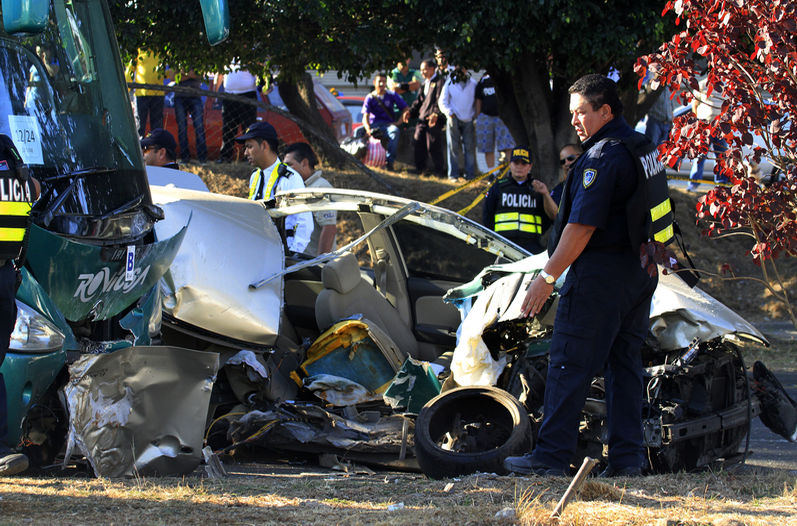 QCOSTARICA – A collision between a passenger vehicle and bus left two dead this Saturday morning, in an accident occurring near the Wal-Mart in San Sebastian, on the south side of San José.

According to a preliminary report by the Transit Police (Policia de Transito), the two young men were travelling in a silver colored Hyundai Elantra when the driver lost control, slammed into a tree and on the rebound was slammed by a bus.

In Cuidad Quesada (San Carlos) assailants seriously injured a guard at the Nissan dealership in an attempted robbery. Police say the guard is hanging on for his life at the San Carlos hospital, where he was rushed by paramedics.

In Orotina, a 40 year-old man died after being struck by a minivan, in Lotes de Coyolar, in Orotina. A friend of the deceased told authorities that his friend had been drinking all afternoon and was struck while trying to cross the busy street.

Traffic official, José Serrano, said that the accident occurred in a very dangerous location, heavily transited and at high speed. A breathalyzer test on the driver of the minivan resulted negative.

In Tibás, bomberos (firefighters) recovered the body of a man found dead under a bridge. The Organismo de Investigación Judicial (OIJ) are investigating.

These are only several of the violent deaths registered on the first day of Semana Santa.

QCOSTARICA - Despite the arrival of the vaccine against Covid-19 in Costa Rica, 2021 will be like “an extension of 2020”, according to Juan...
Health

QCOSTARICA - The American drugmaker, Pfizer, said in a statement on Friday that reduced deliveries were a temporary issue, affected by changes to its...
Health

QCOSTARICA - The contagion rate, also called the R rate, of covid-19 in Costa Rica has dropped significantly from last week, 25.8%, and to...
Travel

QCOSTARICA - A young man survived after jumping on his bicycle from the roof of an ice cream parlor and suffering a severe blow...
Politics

QCOSTARICA - In a little over a year, in February 2022, Costa Ricans will take to the polls to elect a new president. General elections...
Health

Is it possible that each year has a particularly sad day? The saddest of all? Of that a date on the calendar can define...
Coronavirus

TODAY PANAMA – With a sideways view of the syringe, nurse Violeta Gaona received the first dose of the vaccine against covid-19 in Panama...
HQ

QCOSTAIRCA - An American woman drowned this Wednesday afternoon in Playa Negra in Puerto Viejo, in Talamanca de Limón. The Red Cross indicated that the...