A Brand New Way of Enjoying Wine By The Glass

Imagine being able to taste the wine before buying it. Or just wanted a glass of a particular wine. And then from another bottle. Now you can with Enomatic® systems that dispenses wine directly from the bottle using revolutionary inert gas preservation.

The flavours and characteristics of the wine remain intact for more than three weeks, as if the bottle had just been opened. 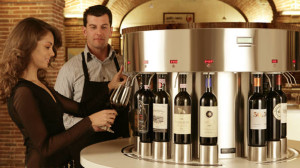 With portion control technology, Enomatic® allows wine establishments to created extended wine by the glass or tasting menus which are enticing to customers and allow business to maximize servings while eliminating waste.

Made in Italy, the Enomatic® is now in Costa Rica, with the only machine so far at the Vinum store in Centrol Comercial Via Lindora, in Santa Ana.

Vinum offers up three samples: a taster, a half glass and a full.  All that is required is plastic – a credit or debit card.

The Lindora wine store is operated by Florida Bebidas, the same people who bring us our beer, bottled water, milk and Pepsi products, among others, in Costa Rica.

Gisela Sánchez, Florida Bebidas director of Corporate Affairs, says the Enomatic® machine will soon be in other Vinum stores .

QCOSTARICA - The prestige of the company of some of the richest men in Costa Rica hangs by a thread. For many, the MECO...
Turrialba

QCOSTARICA - The 5.7-magnitude tremor, felt at 5:27 pmon Thursday, occurred in a maritime zone with the potential for stronger earthquakes, explained Ivonne Arroyo,...
HQ