A “Clean Well Lighted Place” for a Drink 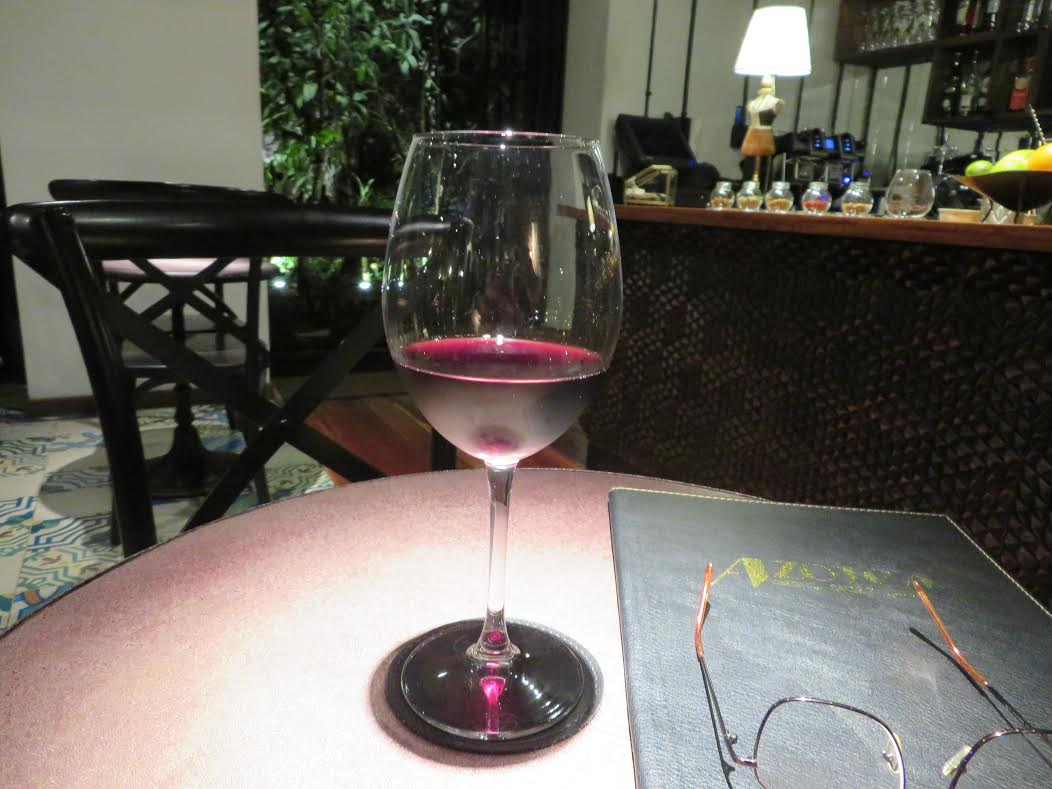 In my travels, I have been fortunate enough to have enjoyed adult beverages at some of the world’s most renowned drinking establishments. I have sipped a Pimms Cup at the Raffles Hotel in Singapore, where I sat under the same overhead fan that Ernest Hemingway, Summerset Maughan, and Rudyard Kipling had in earlier eras. 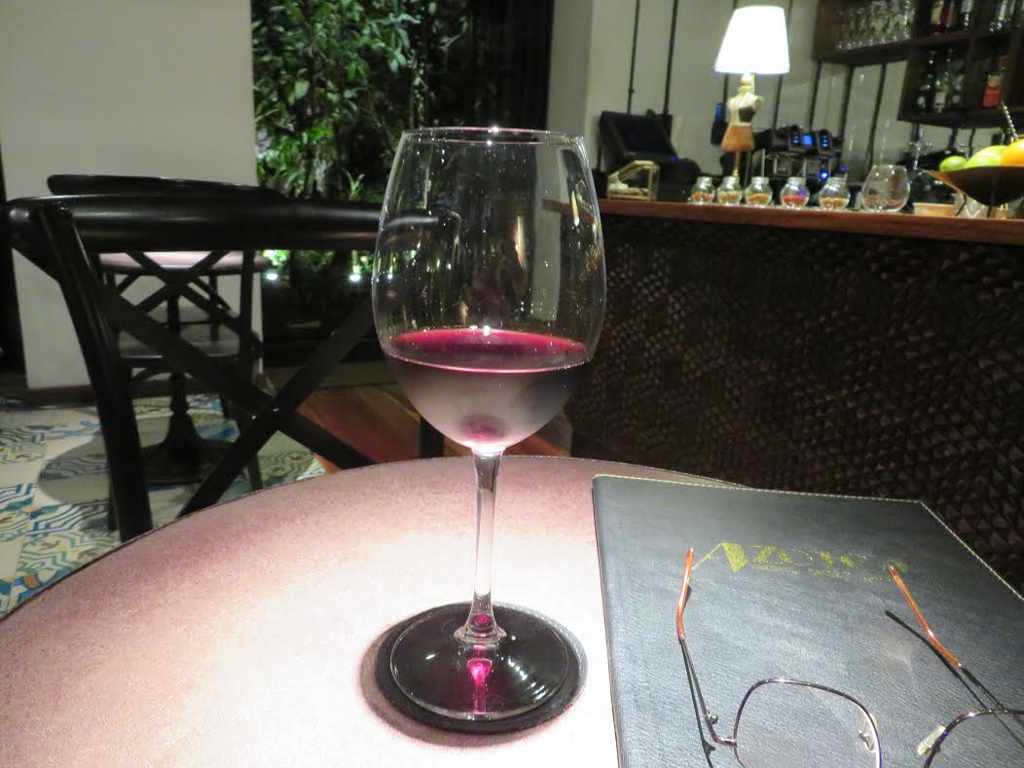 I have watched the Pacific surf with an old-vine zinfandel at the Hotel del Coronado in San Diego, California. I have savored a snifter of cognac at the stately Plaza Hotel in New York City.

I now live in Costa Rica. As I reflect on those rich old memories, a question comes to mind: Does Downtown San José offer such a civilized refuge where one can indulge in an early-evening cocktail? Well, let me offer three places that are worth considering.

This past summer, the historic Gran Hotel Costa Rica completed an extensive top-to-bottom renovation. One of the key changes that they made was to the top floor, which now holds the check-in lobby, some nice comfortable seating areas and an elegant bar and restaurant.

If you are not familiar with the Gran Hotel, it sits on the Plaza de la Cultura in the center of Downtown San José, and it is just a few steps from the National Theater of Costa Rica. Originally built in 1930, it is now recognized as a historical architectural monument. Since it’s beginning, the Gran Hotel has been an important part of Costa Rica’s history. It has even named a suite after its most famous guest, President John F. Kennedy.

Today, when you take the new glass elevator to the top floor, you can’t help but be impressed by the sleek modern elegance of the check-in lobby, and of course by the stunning views. As soon as you arrive on the top floor, you are almost compelled to walk to the windows and take in the sweeping view of the Plaza, the National Theater and all the way to the mountains that rise up to the south of the city.

The bar features chic lights and fixtures hanging from the ceiling that go surprisingly well with the original tile floor that has been carefully preserved. There are tables at the windows that allow you to watch the comings and goings on the Plaza and at the Theater. And there is a grand piano, which we are told, is played on Wednesdays during happy hour.

The only criticisms that I have heard about the bar at the Gran Hotel Costa Rica, is that it should have been created as a more intimate space. The critics say that it is wide open with the rest of the top floor and that it has all the warmth of a convention center. Well, be that as it may, I think it is one of the most memorable places in Downtown San José to have a cocktail or a glass of wine. 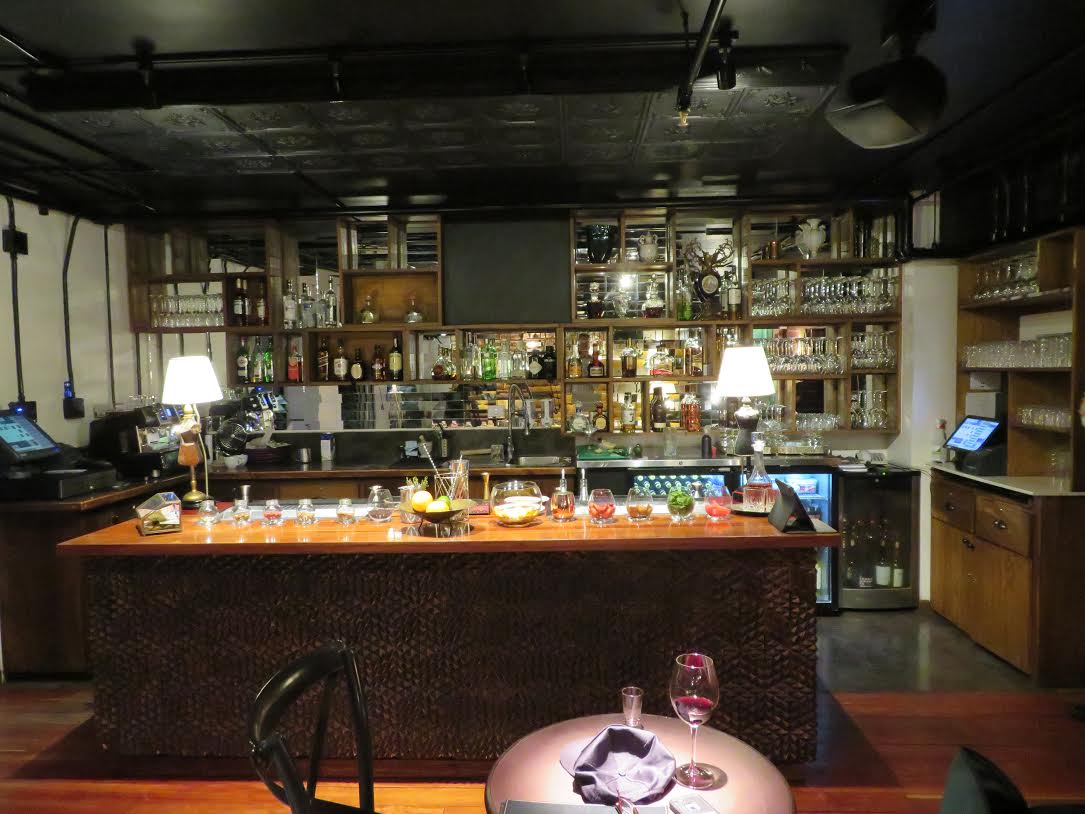 From the outside, the renovation of Hotel El President has made two very noticeable changes. The first is its modern-art paint job that gives it’s exterior an almost graffiti-like appearance. The second is that they have inexplicably moved the main entrance of the hotel from Avenida Central, to around the corner and down the street on Calle 7.

On the fourth floor of the hotel, there is an inviting bar and boca lounge called Azotea. Here the room is warm and comfortable, and the back bar has a very polished classy appeal to it. The room opens up to a “roof-top” section of open air seating that is just delightful. And even though it does not have commanding views, it is a great place to enjoy a beverage or two (weather permitting).

Although I really like the beauty and the feel of Azotea, and the welcoming attention of the staff, I have two problems with it. The first is that, even though Azotea is only 4 stories up, you will need to find and to take two separate elevators to get to it. This was certainly not very well thought out by the hotel’s architects.

I can overlook the confusing elevator issue, but the second problem is much more glaring for me. I ordered a glass of wine, and when it arrived, there was a mere two fingers of wine in the bottom of the glass. (There appears to be a very worrisome trend among some upscale restaurants and cocktail lounges; to see how little wine they can give to their patrons.) It is a shame, since Azotea could be a favorite drinking spot if this serious problem is rectified.

Perhaps the best well-stocked bar in town is in the venerable Argentinian restaurant, La Esquina de Buenos Aires. Here you will find a wide selection of Scotch and Bourbon, Vodka and Gin, Brandy and of course some of the very fine sipping-quality Rums that come from this part of the world.

Then there is their wine list: It is nothing short of amazing. There are several pages of wine offerings mostly from Argentina and Chile, and also some from Spain and Italy. There is a good selection of wines by the glass, including a very drinkable house wine.

Of course, the reason most people go to La Esquina de Buenos Aires is for its food. Widely known for its Argentinian beef, it also has good seafood dishes and, since Buenos Aires has a very sizable Italian population, it has some great pasta dishes.

The one difficulty with the bar, is that it is just a bar . . . . and a small one at that. The bar is tightly wedged near one wall and has only 8 seats, and there is no lounge seating area. So this bar is unfortunately not suitable for a party of 2 or 3 couples.

However, most of the times I have have been to La Esquina, I have gone solo or with just one friend. I enjoy sitting at the bar for a drink, and even for dinner. In fact, since La Esquina is such a popular place, I have always met interesting people sitting on either side of me.

If you are reading this story, you are probably past the age where you use the word “party” as a verb. There comes a time in life when we choose one or two comfortable establishments to share a drink with friends. Like Hemingway, we all search for that “clean well-lighted place.”

I enjoy each of the three places mentioned above, even though I recognize that each has its advantages and its drawbacks. They are part of what gives Downtown San José so much character. They are all part of “the real San José.”

Michael Miller is the author of the first and only guidebook that focuses on Downtown San José, Costa Rica, titled The Real San José. Paperback copies are available for sale at the ARCR Office. An electronic version of The Real San José is available at Amazon/Kindle.

Your questions and comments are always welcomed. You may contact Michael directly by email: therealsanjose@gmail.com. You can see other stories that Michael has written about Downtown San José at his website: TheRealSanJose.com

- Advertisement -
Paying the bills
Previous articleWar Of Words: Nicaragua and Costa Rica Over The Two Ticos Arrested In Sunday’s Protests in Managua
Next articlePeru: Odebrecht Strikes Again as Fujimori Dynasty Teeters on Brink of Collapse

QCOSTARICA - The first lady of the United States,...
Michael Miller