A Close Encounter of the Obama Kind 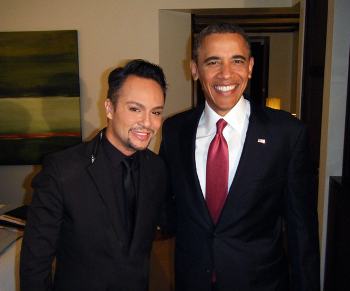 Ángel Rafael never imagined that one day he would be face-to-face with a U.S. president, let alone doing his makeup. So, when he got the call from the Whitehouse giving him the job of making up President Barack Obama, he was thrilled and nervous at the same time. 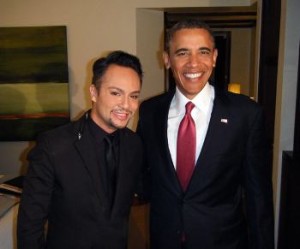 Ángel Rafael was recommended by Telenoticias reporter and Telemundo correspondent in Costa Rica, Yessenia Alvarado. After an extensive interview, Ángel Rafael was chosen by the Whitehouse as he local professional.

“They asked for my resume, asked me very personal questions”, said Ángel Rafael.

Ángel Rafael arrived at 7am Saturday at the Intercontinenal hotel in Escazú amid heavy security that took him almost 45 minutes to reach president Obama.

“I was very nervous, I could feel my heart beating out of my chest”, commented Ángel Rafael who got to spend about 20 minutes with Obama, five of which were to apply makeup.

Ángel Rafael said that the president as “super good people”. The prez asked for a very soft makeup, “basically something light for skin correction, powder to give high definition”.

The makeup artist said he got to recommend his favourite Guanacaste beaches to President Obama, who had asked him for vacation recommendations.

Obama let out his charisma, joking with Ángel Rafael, including that Michelle would sure like Ángel Rafael to make up her.

But, what impressed Ángel Rafael most was Obama thanking him for his work and using his name. “When he left he thanked me for the work and the tips, he called me by name three times, which impressed me very much”, said Ángel Rafael.