A crater lake in the Poás Volcano in Costa Rica may hold the secrets to potential past life on a planet that is 34 million miles (54.6 million kilometers) away and only recently within the reach of unmanned rovers.

A team of researchers visited this hostile lake in Central America on a mission to see if one of the harshest environments on our planet actually supports any life – and provide a stage for viewing potential life on Mars.

The Poás Volcano is classified as a stratovolcano, which is a cone-shaped volcano that has a reputation for violent eruptions. Some of the most devastating volcanic eruptions around the world have been from stratovolcanoes. Poás has three craters and two summit lakes, Laguna Caliente and Lake Botos. The highest point of the volcano is 1.68 miles (2,708 meters) above sea level. Despite the elevation, it’s actually a very easy volcano to access. In fact, it was one of the most visited volcanoes and national parks in the country until it was closed off to visitors on April 13, 2017 due to dangerous volcanic activity. But don’t fret – the park is planned to reopen in July 2018*. 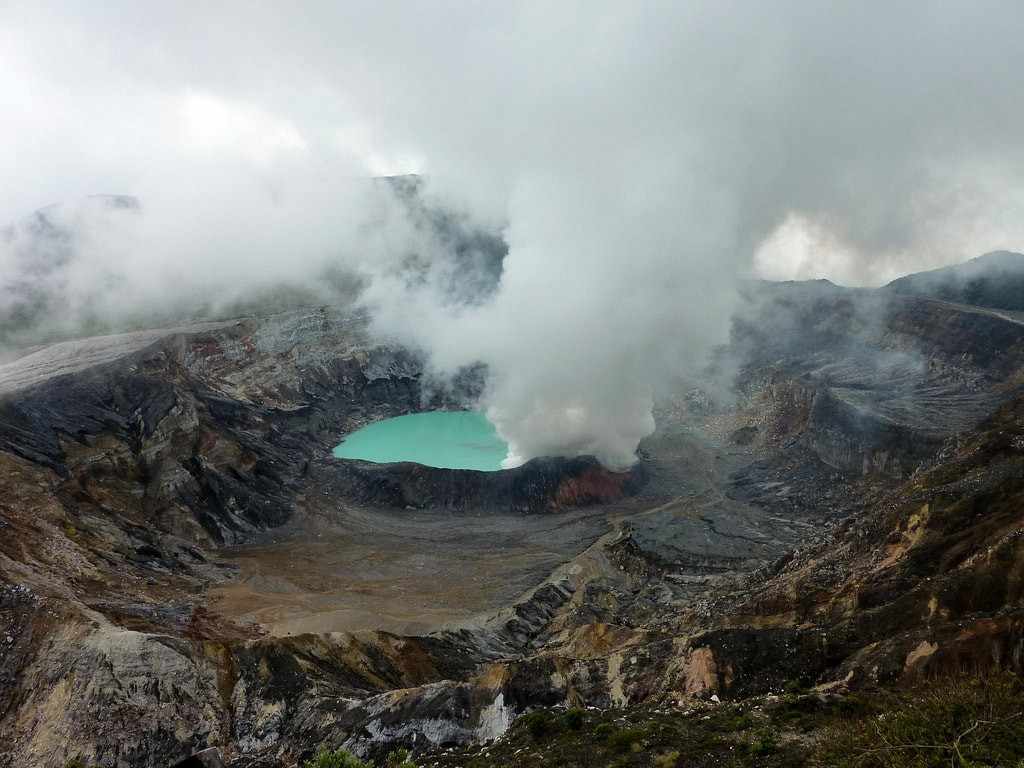 Laguna Caliente, literally translating to “Hot Lake,” was the site of interest for associate professor Brian Hynek and his team of researchers from the University of Colorado Boulder. Their goal was to collect water samples from the lake to later test them for signs of life. Laguna Caliente has an acidity level that is 10 million times more acidic than the water we drink. It is one of the most extreme environments on Earth. The temperatures can also change drastically in a very short period of time and can reach near boiling point.

This lake in particular was chosen because it’s believed that Mars might have looked quite similar to this environment four billion years ago. Liquid water once covered Mars and it’s possible that life on Mars would have survived in a form similar to any life that could survive in an environment like Laguna Caliente

This mission was obviously a risky one. The team had to be extremely careful and quick in their collections, as an eruption could happen at any moment. The lake also has geyser-like eruptions, which put the researchers at an immediate risk of severe burns from boiling mud and water shooting into the air where they were trying to collect samples. Fortunately, the samples were collected successfully, and the results were fascinating.

The water samples came back with the signature of one species of bacteria that belongs to the genus Acidiphilium. The researchers found it strange that only one type of organism existed in this environment instead of a whole community of organisms, or no life at all. While it’s possible to find a place with either extreme, the in-between was highly unusual. Professor Hynek stated that, “If life did evolve on Mars, it would likely have survived in ways similar to the lake’s bacterium – by processing the energy from iron- or sulfur-bearing minerals.”

The data collected and the discovery of a singular type of life thriving in this hostile environment now give scientists more clues as to what life on Mars might have been like four billion years ago. In 2020, a new rover is being sent to Mars to look for fossilized life. Mars was once as extreme an environment as Laguna Caliente and other volcanic bodies of water around the world, including the minerals pools of Yellowstone National Park. Thanks to Costa Rica, Hynek now believes that early life on Mars wasn’t necessarily diversified, as the 2020 mission hopes to find, but rather more similar to what was found in Laguna Caliente.

The Poás Volcano will reopen around July 2018. In the meantime, you can explore the other volcanoes of Costa Rica while you wait and prepare. As you hike around the volcano lakes and bizarre landscapes for yourself, you could now try to imagine what life on Mars might once have been like. In addition to a camera, remember to bring plenty of water, good sneakers, and perhaps a change of socks, light snacks, and a flashlight for extra safety. And remember not to touch any steaming water.

*After 16 months closing the Poas Volcano re-opened its doors to the public in Augsut 2018. Access to the Poas is every day from 8 am to 3:30 pm including weekends and holidays. Entry is ¢1,000 for national and resident visitors 13+ and US$15 non-residents visitors over 13 years. Children under 2 years of age, as well as national residents and visitors older than 65 years do not pay entrance.

For up-to-date info on park hours and costs, visit the Sinac website.

QCOSTARICA - The news of the reinstatement of the...
Trends