A Tale of two real estate conmen in Costa Rica 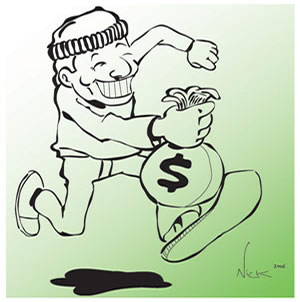 An excerpt from Christopher Howard’s new book, ”The Costa Rica Chronicles – a glimpse of a magical and lost time”.

Many foreigners who come to Costa Rica seem to leave their ‘Brain on the plane’ and make foolish investments by doing things they would never have dreamed of at home. They basically fall in “lust” with the country. So, it is always wise to ‘test before you invest’ before you do any business in this country.

Not all Costa Ricans or expats are dishonest. Nevertheless, one has to be very careful when not playing on one’s home turf. The narratives below serve as prime examples of real estate fraud that has occurred here over the years.

One Costa Rican pundit offered a word to the wise, “The gringo real estate market in Costa Rica consists of smart gringos selling to dumb gringos.” There is some truth to this statement.

L.N., a betrayer of his friends and clients

L.N. arrived in Costa Rica from British Colombia where he had worked as a realtor for Remax. He didn’t waste any time in setting up a Remax franchise that was very successful in the early years.

L.N. stands about five feet 3 or 4 inches tall. Hence, many refer to him by his nickname of “shorty” or jokingly “medio polvo” (half pint) in Spanish.

However, L.N. met and married a Colombian woman which eventually would lead to his downfall.

When the real estate business went down as a result of the economic downturn in 2008, so did L.N.’s business ethics.

His wife was basically with him to drain his finances. Slowly but surely, he began to experience hard times. He feared losing his wife if his money were to run out, so he opted for a life of crime. What did he do?

Finally, when things got too hot in Costa Rica he was forced to leave and move back to Canada.

Epilogue: Broke and with no way to pay his clients back, L.N.’s wife left him for his best friend. What goes around comes around. L.N. is now living in Canada and eking out a living by selling real estate. Instead of freezing his buns off in Canada, he would much rather be living in Costa Rica, but cannot return for obvious reasons.

This smooth-talking Canadian scamster made his way to Costa Rica from Canada via the Bahamas and Florida. When things got too hot for him in both places, he then relocated to Costa Rica in the early 1990s.

The bullshitter set up shop in the town of San Antonio de Belén. One of the main attractions was the Cariari Country Club. BS and his then wife built their dream home and became members of the country club set.

Years before BS married his highs school sweetheart while living in Canada, but was a notorious philanderer wherever he lived.

About ten years after settling down in Costa Rica BS started a real estate company around 2004, just when the boom began here. He did very well buying and reselling properties and helping his clients make a lot of money. Then because of his insatiable greed, he tried his hand at being a real estate developer which he had really never done before.

Since he had helped a few of his select clients make good money by purchasing and selling homes and property, his clients developed a blind faith in him which turned out to be the perfect con.

Shortly after gaining the confidence of a group of his clients he found two large parcels of land in the mountains between Jacó Beach and the town Quepos on the Pacific Coast. One property was about 600 acres and the other about 200 acres. The idea was to build rustic homes in a natural setting.

On paper, the investment looked both feasible and profitable given the hot Costa Rican real estate market. In fact, from late 2005 until the economic crash in the United States Costa Rica was one of the five best markets in the world. Everything came to a screeching halt when things melted down in the U.S. and other parts of the world around 2007.

There was both a good side and a bad side to the investment. The bad side is that the investors ended up losing their money because neither of the large parcels of land could be developed or sold because of the economic downturn in the USA.

The good side is that BS was exposed for lying to his investors. It turned out that the investors were the ones who really bought the property and not our friend BS. The amount he claimed to have invested personally was the difference between the real price and what he said was really paid for the land.

For example, one property cost $700,000 which was purchased with the investor’s money. BS claimed that the price was around $1.6 million and that he had invested $900,000.

A few of the investors became suspicious of BS and found out this information after a meticulous investigation. Furthermore, BS used the same modus operandi to buy the other property where a similar amount of money was involved.

He also managed to sell a third parcel of land in the same area to another group of unsuspecting investors without putting in a penny of his own money.

The investors tried to sue BS for fraud but to no avail. He had covered his tracks very carefully. If this had happened in the United States or Canada, BS would now be doing time in Jail.

Epilogue: BS is now old, suffering from borderline dementia, and still up to his old tricks.