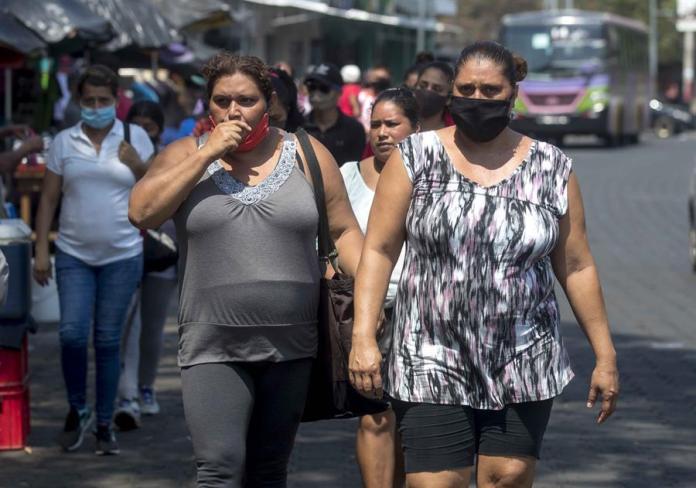 Brazil and Nicaragua are the two Latin American countries that are still resisting the implementation of measures to prevent and control the spread of Covid-19.

Presidents Jair Bolsonaro of Brazil and Daniel Ortega of Nicaragua have both repeatedly refused to adopt public health strategies in accordance with the recommendations of the World Health Organization and the Pan-American Health Organization, even though the virus has spread at an alarming rate in both countries.

The logic of the Ortega- Murillo government

The decisions that the Ortega government has made with respect to the pandemic have surprised many. Some find them irrational or senseless. Actually, though, they reflect the president’s vision and that of his close circle for ruling the country, coping with the crisis they’ve been dragging around since April 2018, and, now, dealing with this new emergency.  Altogether, it’s a logic of premeditated omission and neglect.

The government has insisted repeatedly on denying the presence and the effects of the virus in the country, with arguments that run from religious justifications (such as the affirmation of Vice President and chief government spokesperson Rosario Murillo that the country’s borders were “impenetrable” thanks to divine protection) to the argument set forth by Ortega himself that they weren’t going to establish any quarantine so as not to harm the economy.

Hence, as the first alerts were being sounded in Central America, the Nicaraguan government began organizing numerous activities that involved large crowds of people, such as fairs, political marches, sporting and cultural activities. They even organized a carnival on the theme of “Love in the times of Covid-19”, where health workers and government sympathizers paraded beside floats, with placards welcoming the virus.

They’ve refused to suspend classes in the public schools, to conduct informational and preventive campaigns among the population, or to realize large-scale testing for contagion, despite the 26,000 test kits that were donated by a regional financial organization.  The Ortega government has also refused to suspend on-site work in the public institutions or to establish a quarantine. On the contrary, they’ve promoted house-to-house [unprotected] visits by the public employees.

One of the aspects that the government has controlled most closely is information about the evolution of the contagion and its effects. From the time the first case was announced on March 18, the information offered has been of very little transparency, offering confusing and imprecise numbers of active cases, recovered cases, deaths, and the number of tests administered.

For several weeks, even when the newspaper reports spoke of hospitals already saturated with patients, the Executive branch continued maintaining that there had only been 27 positive cases and refusing to recognize the existence of community transmission.  When the curve of cases began to rise exponentially, they had no other alternative but to recognize it, so that the registry of cases jumped from 279 cases reported at the beginning of May, to a total of 759 cases in the lapse of just two weeks.

One of the most serious and contradictory decisions of the Ortega-Murillo government had been to impede the use of protective equipment among medical personnel, including those who were attending patients with COVID-19. This contributed to the spread of the COVID-19 virus to 40 doctors and health workers in Nicaragua, some of whom died of the disease.

Following a strong public protest from more than 700 professional health workers, and when the curve of contagion had already begun to ascend, the Executive branch finally allowed the use of facemasks and other protective equipment, often acquired by the personnel themselves.

One of the most dramatic consequences has been the subsequent policy of placing police and armed civilians at the entrances of the hospitals, to avoid the demands of the family members of admitted patients, and to control the health workers, so that they don’t leak unauthorized information. These groups of police and armed civilians assist at the burials of those who died of the disease, to keep the families from denouncing irregularities.

On other occasions, they’re the ones responsible for carrying out the so-called express burials, which involve burying those who have died from the virus at advanced hours of the night, many times without the presence of relatives, so that the rest of the people don’t find out.

As has been made clear, the actions of the state are key to combatting this global pandemic, and can make a substantive difference in the spread of contagion, or in the consequences of the virus.  In the case of Nicaragua, the government of Daniel Ortega and Rosario Murillo are the clearest example of an absent state, that – in a premeditated way – has opted to confront the emergency from a political stance that is deadly and authoritarian.

The other side of the coin: an active citizenry

The voluntary absence of the state has left the population exposed and unprotected in the face of the pandemic. Because of this, people have opted to take their own protective measures, individually as well as collectively. Many of them have quarantined themselves and are voluntarily respecting social distancing, using facemasks and other protection when they go out on the street.  There are also many very valuable initiatives on the part of organized groups.

One of the first and most notable is the conformation of a Multidisciplinary Scientific Committee, made up of professionals from different specialties who, in the face of the absence of the state and the lack of information, have become the principal point of reference for the population.

Since before the first positive case was confirmed in the country, they have assumed the job of issuing alerts, analyzing the evolution of the contagion, recommending preventive measures and facilitating the information within their reach to lessen the effects of the pandemic among the population.

Another important group is Unidad Medica Nicaraguense [Nicaraguan Medical Unity], an independently organized group of doctors who have joined on with this effort and have been willing to care for patients who were rejected by the country’s precarious health system, or who prefer to stay at home because they fear becoming infected in the hospitals, or whose symptoms are mild, or sometimes because they can’t afford private health services.

Another group of organized professionals is the COVID-19 Citizen’s Observatory, that registers information and follows up on suspected cases of the virus in Nicaragua. Their data is collected via a vast network of volunteers and local leaders, who identify the cases. Every reported case is verified and incorporated into the statistics once it is confirmed. The focus they utilize is that of community epidemiological vigilance. Those participating define it as the collaborative effort of an interdisciplinary team, together with organizations, social networks and individual citizens. Together, and voluntarily, this team contributes to filling the vacuum of information on the pandemic.

They issue weekly reports with detailed information about the case numbers in different places in the country, although it doesn’t comprise an official or a complete report.  The information is made known through social media accounts that the Citizen’s Observatory itself has created.

There are two other initiatives that have been carried out on a large scale. First, information and prevention campaigns circulating on social media, promoted by different social and political organizations; and secondly, local chains of support and solidarity, organized by people linked to the civic movement that’s been active since April 2018. These groups bring aid to infected people and families, or to those in vulnerable situations.

In the face of a state that has been purposefully absent, the existence of an active citizenry has become an immense social capital. On the shoulders of these independently organized groups lie the most important actions being realized in Nicaragua to prevent, contain and mitigate the most critical effects of the pandemic, as much in public health and humanitarian terms, as in the economic and social arena.

This article was originally published in Agenda Publica (in Spanish).

QCOSTARICA - As is custom every second Friday of...
Latin America