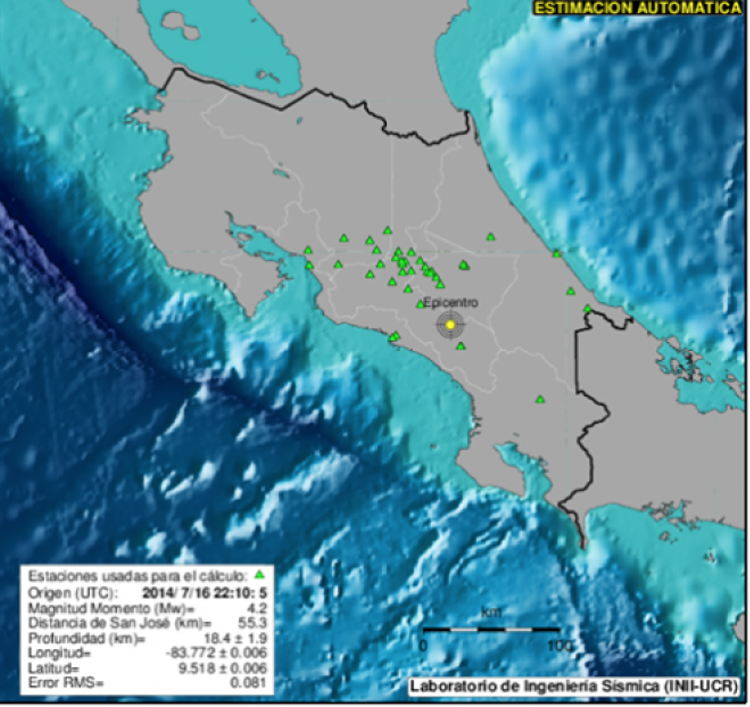 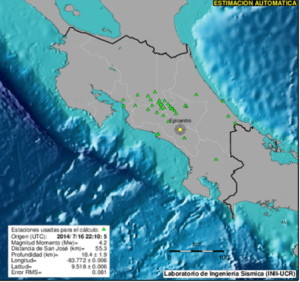 COSTA RICA NEWS – A quake registering 4.5 on the Richter scale shook Costa Rica at 4:10pm, as reported by the Observatorio Vulcanológico y Sismológico (OVSICORI) at the Universidad Nacional (UNA).

The epicentre was located some 2 kilometres from Perez Zeledon and felt throughout most of the Central Valley and southern zone.

Instruments at the Red Sismológica Nacional of the Universidad de Costa Rica report the quake as a 4.4 magnitude.

Earthquakes are common in Costa Rica, many going unnoticed save for the automatic recording instruments monitoring seismic activity.

For instance, today, July 16, three quakes were recorded so far: the 4:10pm and two others in the early morning at 5:43am (2.5) and 1:23am (2.6), with epicentres in the provinces of Guaancaste and Puntarenas, respectively. Perez Zeledon is in the province of San José.

On Tuesday (July 15), OVISCORI instruments recorded six quakes, the strongest a 3.1 magnitude at 8:05am in Puerto La Playa, Golfito. The others occuring in Aguirre (Quepos), Espadilla, La Playa (a second tremor) and Cantarrana, all in the southern zone in the province of Puntarenas

QCOSTARICA - After years of deterioration and antiquity, work...
Politics