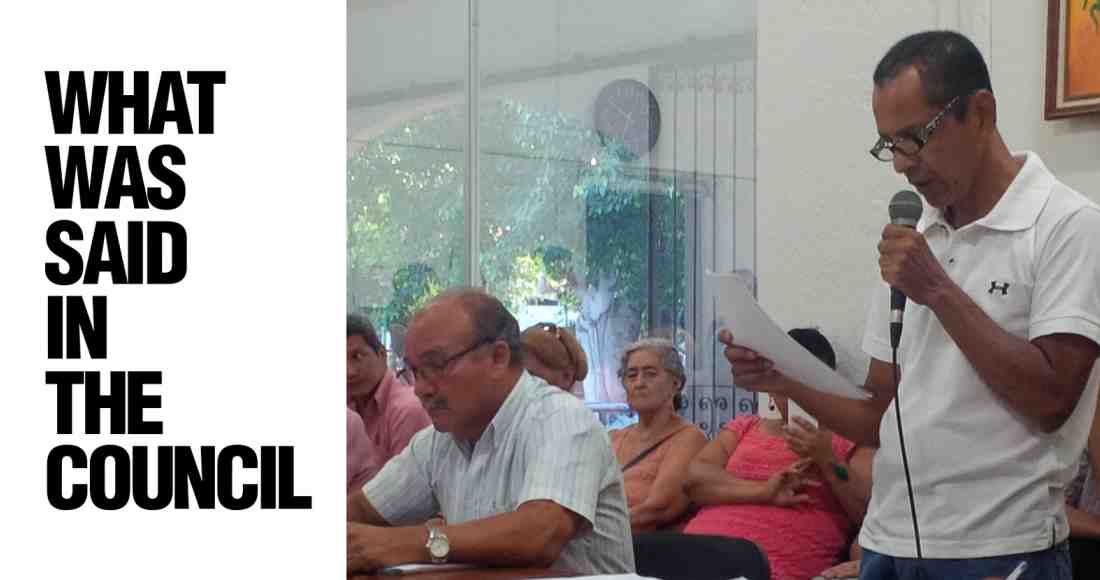 QCOSTARICA (By Wilberth Villalobos Castrillo, Vozdeguanacaste.com) The poor state of the road leading to the Nicoya Airport Neighborhood motivated a group of residents to attend the ordinary session of the Nicoya Municipal Council on Monday, March 17.

Marciano Martinez, president of the Airport Neighborhood Development Association (Asociacion de Desarrollo Integral Barrio Aeropuerto) reported that the community has been dealing with the problem for several years and that since 2012, Mayor Marco Jimenez has promised to address the issue. To date no repairs have happened.

In addition, they presented a project to the Municipal Council that they intend to develop with the support of the National Community Development Directorate (DINADECO – Direccion Nacional de Desarrollo Comunal). The project would involve asphalting, protective barriers and sewers on the Rio Grande road from the Care Network (CECUDI – Red de Cuido) to Quebrada Matabuey, totaling some 1,350 meters.

The document was signed by more than 200 residents. In it they requested that the Technical Roadways Unit (Unidad Tecnica Vial) provide the technical study for the project and 30% of its cost.

For his part, Marco Jimenez explained that the municipality already began the necessary paperwork for the effort to the Ministry of Public Works (MOPT – Ministerio de Obras Publicas). He said that it hasn’t been implemented because financing through an agreement between MOPT and the Inter-American Development Bank (IDB) will be provided in progressive stages among the country’s municipalities.

As part of the agreement, all municipalities must present projects, but according to Jimenez, to date there are municipalities that have not even executed the first stage. For that reason the rest of the municipalities are unable to continue with their projects.

“The IDB doesn’t disburse funds because there are other municipalities [that are] behind; that’s not the case of the Municipality of Nicoya,” explained Jimenez.

Another one of the residents’ concerns was the recent application of molasses to the neighborhood’s roads, which was carried out by the municipality. They believe that the amount of material applied was insufficient.

Regarding that situation, the mayor explained that the application work is still unfinished.

In response to those explanations, the residents requested a copy of the paperwork already completed by the municipality. They also requested improved communication from the mayor.

EXPAT FOCUS (MND) Of course it was no surprise that readers of Mexico News Daily voted Mexico as the No. 1 expat destination in...
Redaqted

QCOSTARICA - Good news for Ticos with traveling fever! From Friday, June 25, Germany will allow entry of travelers from Costa Rica as long...
Health

QCOSTARICA - What had been a good tool as a payment mechanism for sellers and businesses, the Ministry of Finance (Treasury) has in its...
Corrupion