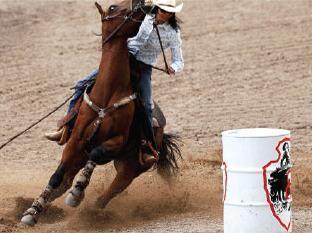 COSTA RICA EXTRA – No, this is not the Tico style of rodeo, it’s the real thing, the first edition in Costa Rica of the American Extreme Rodeo.

The event was confirmed by RPM TV and will be held at the Estadio Nacional (National Stadium) in La Sabana, on September 6 and 7, with an expected 13.000 fans to attend on each day.

According to Manrique Mata, president of RPM TV, the Extreme American Rodeo is an idea of almost four years in the making, that high costs didn’t make it viable until now.

“There are many in Costa Rica that like the American-style rodeo,” said Mata, adding that the event is being made possible with the help of  Asociación Pro Rodeo and Michael Blake.

Competitors will be from Costa Rica and six other countries: Australia, Mexico, Brazil, Panama, Guatemala, and the United States.

For the event, some 500 cubic metres of soil and sand will hauled in, to create a 15 centimetre (6″) thick cover over the stadium’s soccer turf.

Fernando Vargas of Pro Rodeo in San Carlos, said that the animals to be used as 100% Tico and coming from various stables, including the El Soldado, El Lecheagria and El Chirbala, in Guanacaste; the Cara Pálida, of San Carlos and El Chambacú, in Tárcoles, Puntarenas.

Some are against this type of sport in Costa Rica and have started a petition, with already more than 1.000 signatures, asking Mr. Mata to cancel the event. “Costa Rica is a country that has been seen by the world for many years as a peaceful Earth, who respects and loves life in all its forms..” says the petition.