An Opinion Piece And NOT A News Story At All – Q 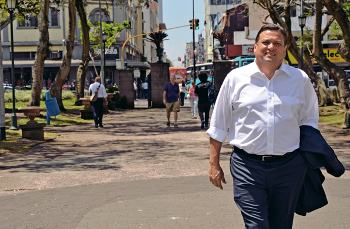 Wednesday, the 7Th of August, I read not an interview as expected of the Johnny Araya camp but rather a rambling, negative, commentary of his mayor-ship of San Jose.  (An ambush)

As luck would have it, I was there at don Johnny’s house when the first reporter from La  Nación came knocking on the door to do the infamous “interview” at 10:15 AM, Tuesday August 6th.

Presidential candidate Johnny Araya was enthusiastic and welcomed the reporter to his living room.

But, according to the published article of August 7, 2103, apparently, the journalist came loaded with negative events about San Jose and placed the blame straight on Johnny Araya for “non-performance” as  city’s mayor and now presidential candidate.

The published front page article was not an interview but rather a commentary of opinion and had little if anything to do with the election in 2014. But now, I know why the journalist shrugged to shake my hand and never introduced himself by name although I did mine to him.

For some reason he came loaded to crucify the candidate!

If the writers want to tell me that San José is a dump, no question. It has been for 50 years. Even the television program “South Park” once said, “…the loser of the contest needs to spend one week in San José, Costa Rica.”

Okay, that was then, years ago. What this front page article failed to say is that San Jose, while far from being a panacea of tourism or hang-out for locals has been far, far improved with hole free roads, weekly public events, improved transit and one can actually walk without fear.

Araya did that against all odds.

San Jose has, over the long and short years, attracted more people looking for work than any other province, city in Costa Rica, Central America. However, with unemployed comes the homeless, crime, drugs and prostitution. Tell me one other city in the world that does not experience this same progression?

Araya himself is a progressive liberal and you might not like that. But that is his stand. Even if the ruling Liberación party, who might well come off as elitist, do not support.  Araya is to the left of centre and will foster  more education, public health care, open and free speech and spend the money on the people; not the person.

As La Nación said in concurrence with CRhoy.com, Araya certainly did produce and was the driving force behind the Christmas Festival of Lights, the open park weekend variety/musical events, the Central American Sports competition, the opening of the troubled, yet Quixotic, Chinese Paseo.  Most importantly, he made San Jose “walkable” and made way for residential construction.

The August 7Th issue of La Nación is a poor example of journalism and its lead story belongs with mine as an opinion piece and certainly not an interview. La Nación is a leading and highly respected newspaper and this is a sad comment where it fell off the horse that got them there.