Ants of CR could use better PR

The most evident and recognizable ant in Costa Rica is the leaf-cutter, able to lift 50 times their own weight and live in a large nest with several entrances and “backdoor” escapes

From HOWLER Magazine – According to The Encyclopedia Britannica, ants are second only to human beings as the most social and communal animals on earth. Some philosophers and myrmecologists (scientists who study ants) have suggested that this order should be reversed.

Evolved from wasps, Formicidae — the ant family of insects — has been on the planet for an estimated 150 million years. The human species, by comparison, began around 300 thousand years ago. 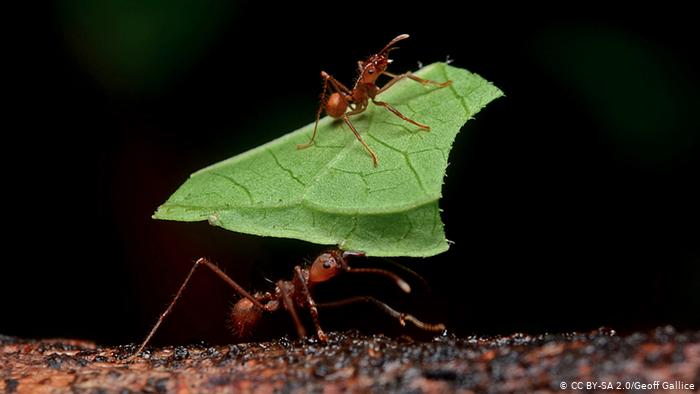 In Costa Rica, ants comprise about one quarter of the total biomass of terrestrial animals — an astounding ratio. The average colony has a population between one and two million citizens, although larger colonies have been observed with up to five million inhabitants.

The “caste” social structure of an ant community is simple: the queen and her male escorts, called “drones,” who also serve as sentries for the queen’s quarters, are the only two members of the species to sport wings. A drone dies after reproducing with the queen, who lays up to 1,000 eggs a day and can live up to 30 years. The entire ant workforce is made up of sterile females.

Ants are practically blind, so they communicate with each other using pheromones and their sense of touch.

Costa Rica is home to 156 endemic species, many of them restricted to specific locales. There are three predominant ant families in this country. 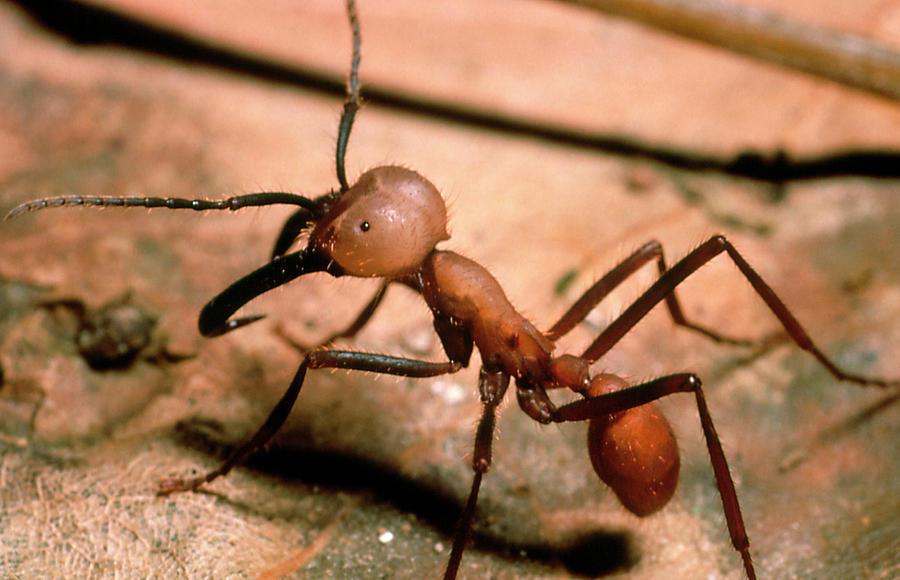 Sometimes called zompopos, this is a transient ant species that bivouacs at night and resides in hollow logs, detritus or just under the surface of the ground. Army ants raid the homes of other insects and small animals in search of larvae and eggs. Predatory birds, such as the motmot, follow army ant colonies, preying on insects trying to escape.

If a colony of army ants visits your abode, they will rid the place of scorpion, wasp and hornet nests within two days, then be on their way. This explains the Spanish nickname limpiadores (cleaners), suggesting these guys really need a new PR agent.

See the video: Army Ants of Costa Rica – Legions of Raiders and Invaders 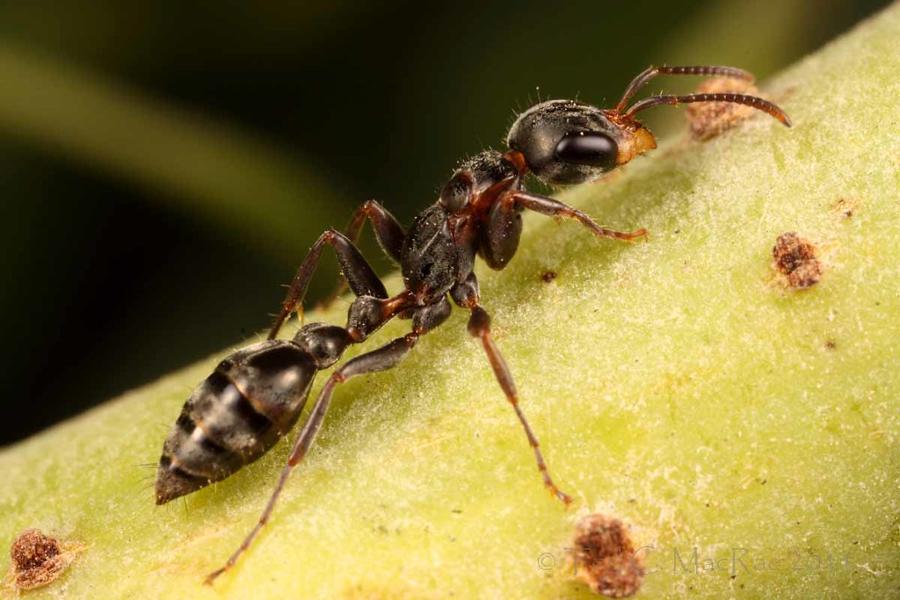 These ants are named for the bullhorn acacia trees they inhabit. The plant is known for its clusters of large, hollow thorns which provide a place for the ants to rear their young. These thorns also supply water and nectar for the ants. At the tips of the acacia plants’ young leaves, tiny red beltian buds sprout, for no apparent reason other than to provide protein for its guardian ants.

The acacia ants reciprocate with defense and security against herbivore insects, such as crickets. They also consume invasive plants around the base of the acacia tree, thus creating one of nature’s many symbiotic relationships. These tiny, aggressive red ants swarm upon the approach of any animal, be it goat or human. 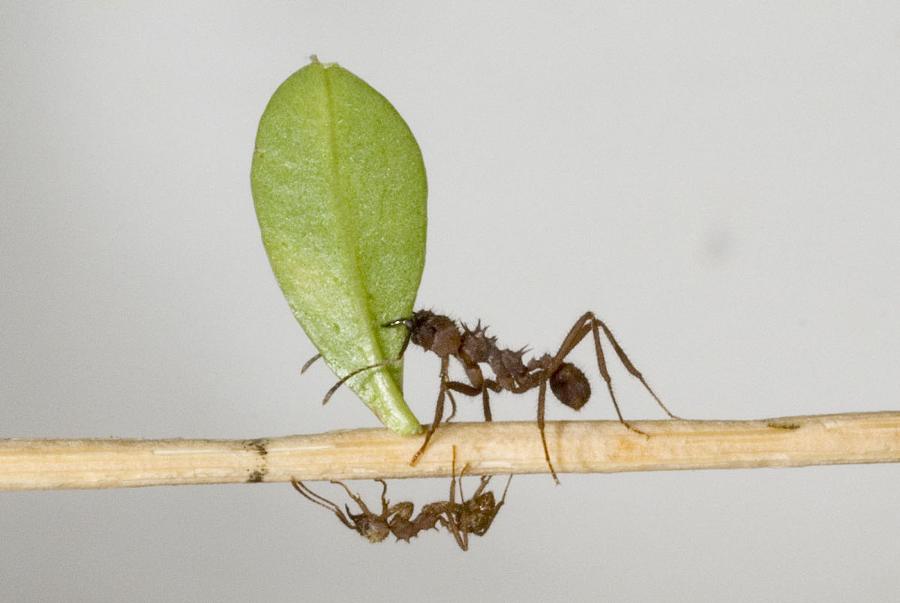 This is the most evident and recognizable Costa Rican ant. Able to lift 50 times their own weight, leaf-cutter ants live in a large nest with several entrances and “backdoor” escapes. They also build “false tunnels” that are not for their own navigation but apparently for ventilation and to confuse predators.

Leaf-cutters do not eat the leaves they are seen transporting. Inside their intricate nests, they grow a fungus garden. First, the ants chew the leaves into a mold that resembles dough, which they feed to the fungus. Then, the ants consume the fungus once it has matured. This mold also serves to keep toxic fungi from propagating in the nest. Interestingly, this fungus is now grown in labs as an ingredient for many human antibiotics.

Cleanliness is key in the leaf-cutter ant nests. Therefore, aging colony members are given the job of moving waste to outside dumpsites where the ants also go to die.

Other “popular” ants residing in Costa Rica include:

And let’s not forget: ants have a history 500 times older than that of human beings. So let’s have a little respect for our elders, the limpiadores of our home.

It seems a conundrum that ants invade our homes to avoid the rain and re-enter during dry spells, in search of water. The reality is that ants, as a community, have one goal: survival. Since they live largely underground, they “come inside” (carrying eggs and infants) to avoid drowning. Likewise, during a drought, they revisit our homes in search of water because their normal supplies (plants, rivulets, etc.) are temporarily unavailable. Most ant species ignore our houses when nature is flourishing, particularly in the spring and autumn.

A natural reaction when being attacked by ants is to immediately try to brush them off our bodies. That is understandable. In truth, we have invaded the ants’ home — their terrain — and they are protecting the colony. The best initial reaction is to quickly move 20 feet or more away from where you are standing to get away from the ant nest, then concentrate on getting those ants off your pants!

Bug sprays are a temporary solution at best, doing nothing to divert the ant colony — meaning the queen. Since ants are attracted to light during the night, this may be the simplest and most effective way to keep outdoor ants from entering your home: “We’ll leave the porch light on for you.”

QCOSTARICA - Is there something worse than having a...
Front Page