The Nerve: hotel where María Luisa Cedeño was murdered asks for money online 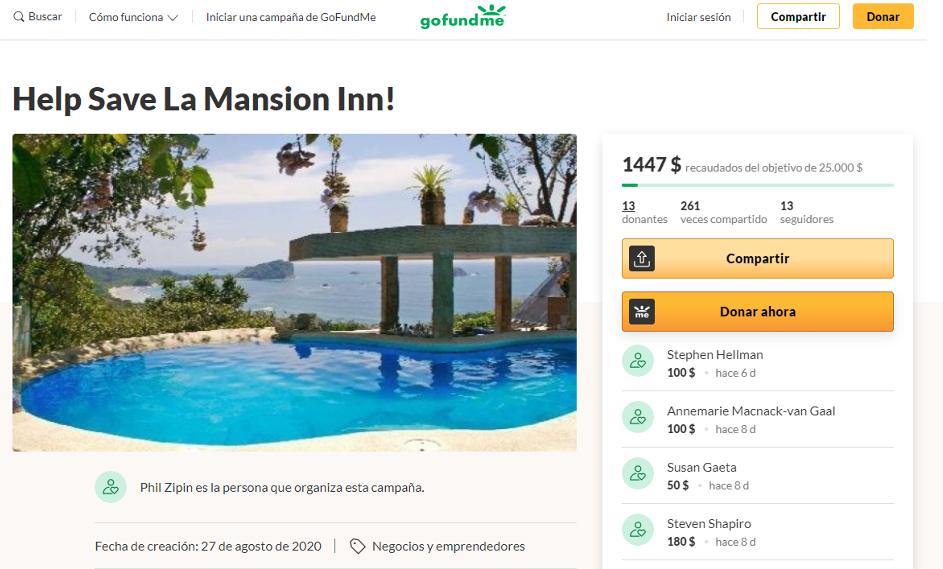 (QCOSTARICA) With all the gall, Phil Zipin, of Silver Spring, MD, has started a gofundme campaign to raise money to benefit the hotel where the María Luisa Cedeño Quesada was murdered last July 20.

The 43-year-old anesthesiologist was staying at the hotel located in Quepos when she was brutally murdered, her body found my housekeeping staff when she did not appear for her scheduled checkout.

“The Mansion Inn needs US$100,000 over the next three months to finish our construction in progress, continue to pay my core staff, cover utilities, and ultimately prepare to reopen,” says the description that appeared on the fundraiser page by hotel owner Harry Bodaan, who is also one of the accused in the murder of the doctor.

“For 25 years at La Mansion Inn, our motto has been “Come as a guest, leave as a friend.” Now, La Mansion Inn needs you as a friend and supporter, to survive these unprecedented times,” starts of the campaign that has so far raised US$1,447 of US$25,000 goal from 13 donors.

Cedeño Quesada, a resident of San Carlos, had taken the weekend off and was out for a walk in the Quepos area. The doctor, who had a promising career, had scheduled her departure from the hotel for Monday morning, July 20, 2020. However, as she did not leave the hotel, staff checked her room and after receiving no response to the call, they opened the door and found her dead, with blows and stab wounds.

The victim worked in a private hospital located in Escazú. Apparently, she was killed with a knife and then wrapped in a sheet.

The first suspect is a Nicaraguan man, who lived in one of the hotel rooms for a year. He will spend 6 months in preventive detention.

The second suspect is a computer engineer and friend of the hotel owner. He will spend 6 months in preventive detention.

The case is still under investigation by the Organismo de Investigacion Judicial (OIJ), who do not discarded other arrests.

- Advertisement -
Paying the bills
Previous articleBCR on Friday experienced problems. An expat’s story
Next articleAnts of CR could use better PR

A Minnesota family stuck in Central America is trying to find...
Read more