As President Villalta Proposes Renegotiating Free Trade With The U.S. 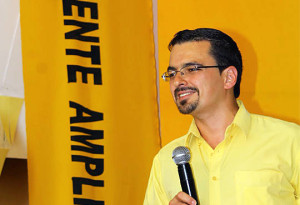 Presidential candidate for the Frente Amplio, José María Villata, said that as president he would push a renegotiation of trade agreements, including the Free Trade Agreement (FTA), with the United States.

Villalta made the statements this morning at the Hotel Costa Rica during a presentation of his plans for government.

In addition, the candidate said he would reorganize the functions of the Foreign Trade office to stop the trend of negotiating trade agreements “like crazy”.

Controlling price of medicine and amendments to the laws on opening of  telecommunications – though not to reserve competition, improve minimum wages, promote job creation and declaring a national emergency on extreme poverty, were other items on the candidates list.

QCOSTARICA - A moderate decline in new cases for the third consecutive week allowed the hospital system to avoid the dreaded collapse and rapid...
Turrialba