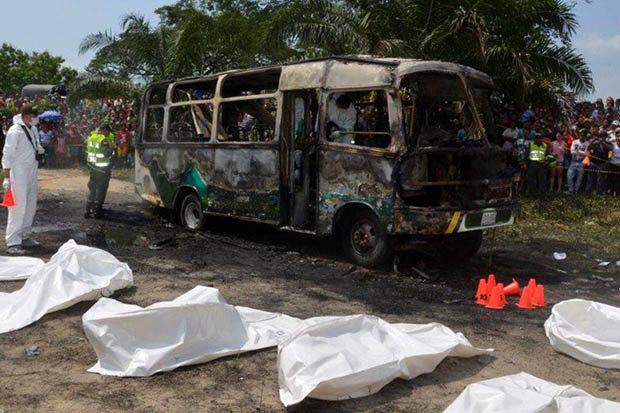 TODAY COLOMBIA – Twenty-six children have died in a tragic bus accident in the north of Colombia on Sunday, local authorities said.

The mayor of the Fundacion municipality in the Caribbean Magdalena state told Caracol Radio that the children were killed as the bus incinerated while on its way to a church service.

According to Mayor Luz Stella Duran, the bus was transporting some 40 to 50 people, mostly children, to the religious service.

A spokeswoman for Colombia’s House of Representatives who was in the neighborhood reported on Twitter that only four children were removed from the bus alive. The mayor said local rescue workers had been able to rescue 10 children, leaving fears the final number of fatalities will be higher.

Colombia’s National Police director, General Rodolfo Palomino, told press that “we are confirming how many” people died in the accident.

The police official said that “apparently a mechanical failure caused the fire inside the bus.”

In a response, President Juan Manuel Santos said to “deeply regret the accident.”

The bus accident is the deadliest in Colombia since 2009 when more than 30 were killed in the western department of Choco.

Q24N - Arriving in the Guatemalan capital about two hours late, after the plane in which she was traveling had to turn around due...
Environment