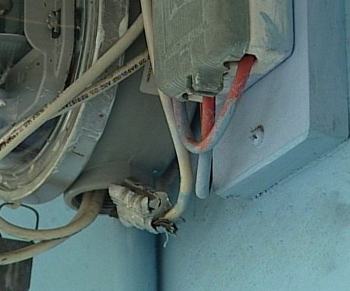 Fire authorities recommend an inspection of all electrical circuits and to call in an electrician if anything is abnormal. In cases where the homeowner has no experience in the matter, best to call in a professional

Circuits for large home appliances require protective devices set or rated for higher currents than lighting circuits. Wire gauges specified in building and electrical codes are chosen to ensure safe operation in conjunction with the overload protection. An overcurrent protection device must be rated to safely interrupt the maximum prospective short circuit current.

In an improper installation, the overcurrent from a short circuit may cause ohmic heating of the circuit parts with poor conductivity (faulty joints in wiring, faulty contacts in power sockets, or even the site of the short circuit itself). Such overheating is a common cause of fires. An electric arc, if it forms during the short circuit, produces high amount of heat and can cause ignition of combustible substances as well.

Q24N - Arriving in the Guatemalan capital about two hours late, after the plane in which she was traveling had to turn around due...
Photos of Costa Rica

QCOSTARICA - For years, Tilarán has seen the transit of tourists heading towards Lake Arenal, the homonymous volcano and La Fortuna or towards Monteverde. At...
Latin America

Q REPORTS (Council on Foreign Affairs) Democracy is being destroyed in Nicaragua. This has been the long-term project of Daniel Ortega, the country’s dictator,...
Front Page