Emilce Steller Ramirez: The Art of Helping a Town Progress

By Arianna McKinney/Voice of Nosara 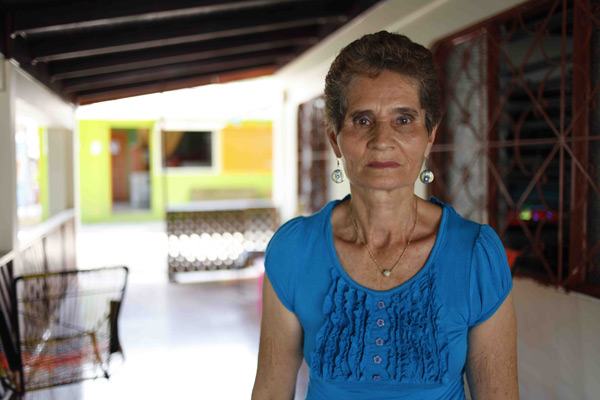 Imagine Samara without running water, without electricity, with gravel roads and no bus service, with no community hall and no clinic and a doctor visiting town only once a month. That is what town was like when Emilce Steller Ramirez arrived in 1973, but in part through her efforts that’s now how it is now.

Serving as treasurer for not one but three community groups, Emilce, currently 66 years old, has been serving the community of Samara for decades, and she was presented with a certificate as Community Leader in Excellence by the Blue Zone Community Foundation in August of 2012 in recognition of her involvement in initiating projects that have benefited the community.

Emilce grew up in Santa Elena of Nicoya, where she attended school through the fifth grade. As a young woman, she went to the fiestas in Hojancha, where she got to know Eduardo Diogenes Villalobos Jimenez, who is 10 years older than her. They married when she was 20 and lived in Maravilla of Hojancha. The couple moved to Samara when she was 27, along with their three daughters. When the girls began attending school, Emilce felt a sense of commitment and soon got involved with the school board and the board of education, helping to raise funds to meet the needs of the school. “I have always liked it and I felt committed because I had my children in school,” she related. “I started little by little and now I have quite a few commitments. Everything one does, one does with pleasure with love of the town.”

The same year that she and her husband moved to Samara, the roadway opened connecting Samara to Nicoya, although it was gravel at the time. They opened a pulperia (small general store) in front of the beach across from the police station, but to bring merchandise, they had to transfer goods on foot across a hanging bridge in Belen and then load them on another vehicle waiting on the other side.

Emilce’s husband worked hard to get vehicular bridges installed, and then the Alfaro bus company sought Emilce out to propose the initiation of bus service between Samara and San Jose. She collected the signatures needed to get approval for the new route, and ever since then she has been overseeing the bus service that brought an increased flow of visitors and tourists to the town.

1977 saw more progress for Samara with the opening of the rural aqueduct, but there was still no electricity so she and her husband would bring diesel from Nicoya to operate the water pump. In 1982, Emilce assumed the role of treasurer for the aqueduct committee and still serves as treasurer of the ASADA to this day.

When she was 47, they sold the property in front of the beach and built their current house on the corner of the main entrance of town. For five years, she didn’t have a business to run and was able to dedicate even more time to the community. A friend from Nicoya pointed out all of the things Samara was lacking and urged her and others to form an association to tackle these needs. The Samara Progressive Associacion (APROSA – Asociacion Progresista de Samara) was formed on July 15, 1993, and Emilce was appointed as treasurer. They began organizing civic fiestas to raise money for community projects, the first of which was building the community hall. Other projects through the years have included installing sidewalks along the main street, helping to build the Catholic Church (she also serves as treasurer for the pastoral council), fixing up the police station and various projects with the elementary school and high school.

Despite so much responsibility, she also finds time to rest and to spend time with her family, especially dedicating time to her eight grandchildren, four of whom live right next door to her. When asked the secret of 45 years of marriage, she replied: “Be calm and be responsible in the house, think a lot about your children and sacrifice a little. And have a good husband.”

She and her husband have always worked together and always run a business together, she related. Although at times she has gone on trips without him, including to Panama when she was 35, to Ecuador when she was 47 and they had closed their business on the beach. At some point, she said she would like to take another trip, perhaps to Mexico again or to the United States, but at present she said she feels good working for the community, being responsible and knowing that what she does is appreciated.