Copenhagen-based Bacon has filmed in Costa Rica and found room for a George Clooney cameo, in a new spot for DNB Bank. The Treasure starts with a pirate chase and ends with a flash-forward to Clooney and his new wife finding the riches on a beach holiday.

Bacon considered locations all over the world before settling on Costa Rica for the pirate adventure that’s the focal point of the spot. The country’s Caribbean feel and the services of Sergio Miranda from Costa Rica Production Service convinced them it was the right move.

Mari Grundnes Paus was Production Manager on the shoot: “The main part of the commercial was shot in Costa Rica in a small town called Puerto Viejo on the east coast … We chose the location mainly based on the incredible nature that had a great combination of the beach and the jungle so close to it … the jungle looked so good.” 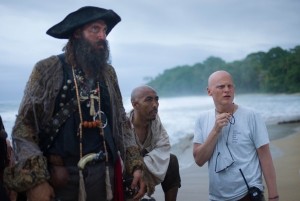 The three-day Costa Rica leg was affected by rainy conditions and the challenge of working with an uninterested 80kg snake that briefly appears in the final cut. Arming the pirates also caused a few headaches when the period weapons were being transported across Central America. A scene where the pirates cross a rickety rope bridge deep in the jungle involved a real bridge that was built on extensively by the team’s set designer. The chasm below it was digitally deepened in the edit suite.

Sergio Miranda comments: “They needed a pristine environment with a wild and exotic rainforest. Costa Rica’s Atlantic coast around Puerto Viejo is picturesque but not too developed and is only three-and-a-half hours from the capital, San José.”

Grundnes Paus adds: “We liked the Caribbean feel and look [of Costa Rica] and it also was undamaged and looked like it could have been the same for a couple of hundred years – it was believable that pirates would be somewhere around it.”

George Clooney’s cameo was filmed at Cabo on the southern tip of the Baja California Peninsula in western Mexico. It was the most convenient spot for the film star as he has a house in the area. Diana Young produced for Bajala Production Services: “The permission to use the beach obviously involved the owners [of a nearby villa], in order to get access to this ‘private’ beach. In fact the beaches here are public up to the 20-metre mark of the high-tide zone.”

The heat was one of the biggest issues here, according to Grundnes, especially for the actress playing Clooney’s ‘accidental’ wife. She arrived on the beach direct from Denmark and faced the full force of the Mexican sun for her day on the sand. The Mexico and Costa Rica beaches were matched up later in post-production.

Q REPORTS - U.S. President Joe Biden is expected to outline his vision of Washington's Latin America policy at the next Summit of the...
Front Page

QCOSTARICA - Friday night, Costa Rica paid tribute to the memory of all the people who have lost their lives due to the pandemic...
Front Page

QCOSTARICA - The so-called Costa Rican space agency, recently approved by Congress, does not have to be a bureaucratic giant, with a large office...
The Americas

Q REPORTS - Former US President Donald Trump's policy of maximum pressure on the Venezuelan dictatorship failed to dislodge the regime or alleviate the...
Health

QCOSTARICA - Five of the 82 cantons of Costa Rica register fewer than 10 active cases of covid-19 to this date, according to the...
Immigration

UPDATED: The DGME confirmed that anyone entering the country on or after December 17, 2019, will be allowed to legally stay until June 1st,...
Pura Vida

QCOSTARICA - To commemorate the Bicentennial of Costa Rica that occurs in 2021, Inverse Project has designed the Torre del Bicentenario for this important...
Banking

QCOSTARICA - Loans in dollars, which had a great boom in 2000, began to slow down since 2016 and today, despite the fact that...
San Jose

QCOSTARICA - After a year of no work, engineers, technicians, producers, cleaners, food and beverage personnel, among others, held a peaceful march this Thursday...